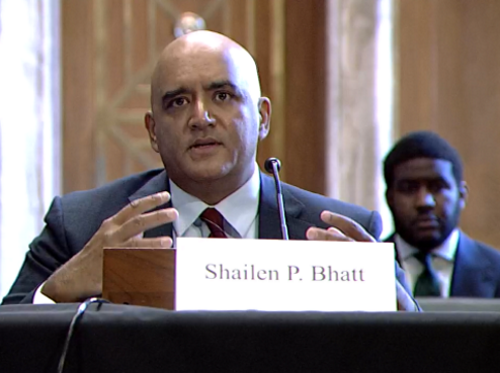 Shailen Bhatt (seen above), nominee to be administrator of the Federal Highway Administration, noted during a Senate committee hearing on September 14 that he intends to focus on highway safety, economic growth, and climate change as key priorities should he win confirmation as the agency’s next leader.

[Above image via the Senate EPW video feed]

“There are many challenges we face as a nation with our transportation system,” he explained during testimony before the Senate Committee on Environment and Public Works

“The National Highway Traffic Safety Administration projected that an estimated 42,915 people died in traffic crashes in 2021 – a 10.5 percent increase from the previous year,” he said. “We must deploy every tool to immediately reverse this trend.”

Bhatt added that the nation’s transportation system are critical to restoring U.S. “economic strength” yet need to be hardened against the impacts of climate change.

“The interstate system that helped America emerge triumphant in the last century requires investment and innovation so we keep our competitive advantage for the 21st century,” he stressed. “We must ensure equity in transportation because we are stronger as a nation when we remove barriers so that everyone can share in the prosperity. We must address the challenges of the climate crisis so that we do not put at further risk the trillions of dollars invested in our transportation network.”

Bhatt credited his previous tenure as an FHWA appointee and leadership roles at three different state departments of transportation – in Kentucky, Delaware, and Colorado– with providing him with key insights into how partnerships are critical to maximizing the value provided by the nation’s transportation system.

Bhatt added that, “most importantly,” it is critical that the FHWA listen and understand the needs of the people they serve to be a true partner.

“Having served at the local, state, and federal level, as well as in the private sector to deliver [transportation] projects, I fully understand the importance of listening and partnering,” he said. “If I am confirmed in this role, I promise to be a trusted partner and listener and commit to strengthening our world class highway system while enhancing the quality of life for all Americans.”