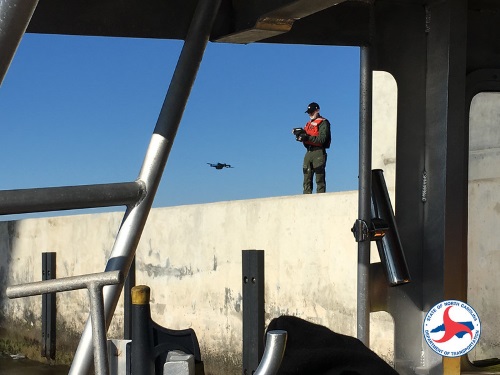 Several national organizations – including the American Association of State Highway and Transportation Officials – are supporting a bill recently passed by the House of Representatives that would broaden the use of drones for infrastructure inspection purposes and provide funding for drone operator training.

H.R. 5315 – known as the Drone Infrastructure Inspection Grant or “DIIG” Act and introduced by Rep. Greg Stanton, D-Ariz. – would authorize the U.S. Department of Transportation to create a $200 million competitive grant program to help state, tribal, and local governments deploy drones to perform inspections of bridges and other critical infrastructure.

“There’s a nationwide backlog for critical infrastructure inspections – and it’s because traditional methods are often time consuming and expensive, and can even be dangerous,” noted Rep. Stanton in a statement.

“Using a drone to inspect infrastructure in hard-to-reach places, such as underneath bridges, can speed up the inspection process, is safer for workers, and can help save states and local transit agencies money,” he added. “I’m grateful to my colleagues for their support and look forward to passing this … bill through the Senate.”

The bill would also allow USDOT to provide workforce training and education grants at institutions of higher education, including community colleges. This would position current and future workers to capitalize on the fast-growing drone economy and help to cultivate a “diverse workforce.”

“Over 90 institutions have been approved by the Federal Aviation Administration as UAS-Collegiate Training Initiative Schools,” noted those national groups in a September 8 letter to House leadership. “This bill would nurture a dynamic workforce – ready to adapt to the technological advancements of the future.”