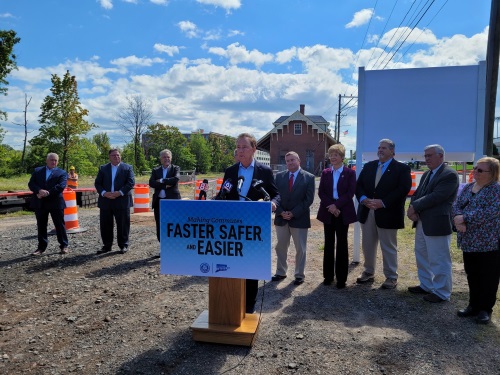 Governor Ned Lamont (D) (seen above) recently joined state and local officials to officially break ground on a new train station and a roadway safety and track improvement project in Windsor Locks – an $87.1 million project located in downtown area next to its historic old station.

The overall project’s funding includes $59.1 million approved by the State Bond Commission back in 2020 along with a $17.4 million grant from the Federal Railroad Administration and roughly $10.5 million from Amtrak, which owns the track and rail line.

“We continuously hear from businesses, both large and small, and residents that they want to be near public transportation that provide convenient options for travel,” the governor said in a statement. “This new train station in Windsor Locks is just another step in addressing our infrastructure needs and expanding amenities on our well-used rail lines.”

The new station will include a high-level platform to allow for level boarding from every train car as well as connections to the Canal Trail via Bridge Street. Additionally, outside of the station construction, the project includes roadway safety and track improvements. Work on both projects should wrap up by the summer of 2025.

“It’s because of the relationships and partnerships we have at the local, state, and federal level that we can move this project along,” noted Joseph Giulietti, commissioner of the Connecticut Department of Transportation.

“We worked together and got this project moving. Through the governor’s commitments outlined in TIME FOR CT, we will continue to bring more services, faster trains, and additional amenities to Connecticut’s rail passengers,” he said.

“Upgrading the infrastructure in Windsor Locks highlights the future of this town’s train service with a new station,” added Tom Moritz, Amtrak’s assistant vice president of infrastructure access and investment. “It includes the addition of a second track, and improved traffic and railroad signal equipment to promote better and safer movement of people and freight, enhance regional rail travel, and improve rail connections in New England.”

This is the latest passenger rail investment made by Connecticut in recent months.

In May, Connecticut DOT unveiled an “action plan” – developed using customer feedback and available online at TransitCX.com – that would outline future programs, policies, and investments to improve public transportation statewide, including its rail service.

That interim plan includes $2.25 billion in total capital program funding for fiscal year 2022, which began October 1, 2021, including approximately $1.36 billion for roadway and bridge infrastructure, $844 million for bus and rail, and $49 million in support of agency facility repairs and improvements.