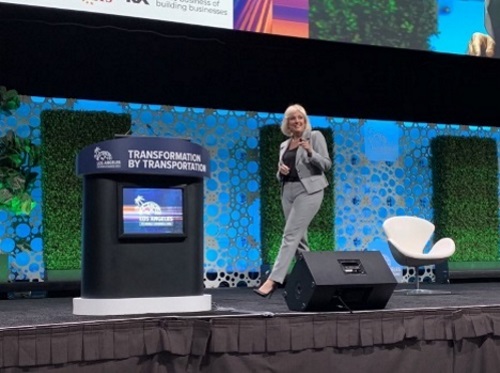 Jennifer Homendy, chair of the National Transportation Safety Board, recently touted the immense safety benefits offered by vehicle-to-everything or V2X technology, vigorously calling for immediate widespread deployment of that technology.

[Above photo by NTSB]

“The hardest part is telling the families that their tragedy was preventable with technology that we have, but we’re just not using,” she explained during her recent keynote address at the Intelligent Transportation Society of America World Congress in Los Angeles. “It’s unacceptable.”

Moreover, while she emphasized that technology is not a “cure all” when it comes to safety, it helps vastly improve transportation safety. “[While] technology is not THE solution for saving lives, it’s PART of the solution,” Homendy said. “We also have a tendency to focus on the ‘next best thing’ instead of implementing the technologies we have right here, right now to save lives.”

That is the promise offered by V2X systems, she stressed.

“V2X can improve safety for vulnerable road users by helping vehicles detect bicyclists, motorcyclists, and pedestrians,” Homendy noted. “And in the future, even the other way around: by alerting road users to oncoming vehicles. The technology can help drivers navigate the road infrastructure more safely, such as making a left turn, merging, and crossing through an intersection. V2X technology can warn drivers to slow down in work zones, speed zones, and around dangerous curves, while dynamic speed harmonization recommends target speeds on roadways to reduce crashes.”

That is why she said NTSB supports a waiver request made by automakers, state departments of transportation, and equipment manufacturers to deploy cellular V2X immediately.

“Like you, NTSB is alarmed by the Federal Communications Commission decision to shrink the spectrum by 60 percent,” Homendy added. “We’ve recommended the FCC protect V2X communications from harmful interference. Because, according to the National Highway Traffic Safety Administration, connected vehicle technology can help significantly reduce roadway fatalities and prevent 615,000 crashes. What are we waiting for?”

However, in August, the District of Columbia Circuit Court dismissed a lawsuit filed by the American Association of State Highway and Transportation Officials and the Intelligent Transportation Society of America in 2021 to prevent the FCC from reallocating swaths of the 5.9-gigahertz (GHz) wireless communication spectrum to non-transportation uses. ITS America and AASHTO specifically filed that lawsuit to ensure V2X technologies could continue safely operating throughout the 5.9 GHz band.

Filed in the D.C. Circuit Court, that lawsuit sought to reverse the November 2020 decision by the FCC to shift 60 percent of the 5.9 GHz spectrum to unlicensed, non-transportation uses, while also preserving the full 75-megahertz (MHz) band within the overall 5.9 GHz spectrum for transportation communications. In a 2020 letter, leaders of the House of Representatives Transportation and Infrastructure Committee criticized FCC’s decision to reallocate this spectrum.

However, the D.C. Circuit Court dismissed the lawsuit in a 15-page opinion that validated the FCC’s approach to reallocating those spectrum bands.