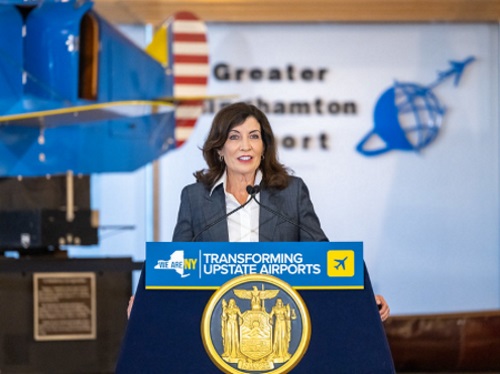 The governor noted that funding comes from the Upstate Airport Economic Development and Revitalization Competition, administered by the New York State Department of Transportation. NYSDOT noted this grant program aims to promote, revitalize and accelerate investments in upstate commercial passenger service airports, helping to create airports for the 21st century.

“Our upstate airports are our gateways to local economies and make lasting impressions, connecting New Yorkers and tourists to the beautiful destinations that the Empire State has to offer,” Gov. Hochul said in a statement.

“By making critical investments to further modernize facilities across upstate New York, we are lifting upstate airports to new heights and providing a 21st century transportation experience that travelers expect and deserve,” she added.

“As we continue to modernize our transportation network across the state, these investments will significantly improve the passenger experience and operations of facilities across the state, helping to ensure an efficient flow of people and goods, and continued economic activity across all upstate communities,” she said.

For example, the aviation division of the Louisiana Department of Transportation and Development recently unveiled a new program aimed at boosting tourism to Louisiana airports, encouraging pilots and aviation enthusiasts to visit airports statewide.

Meanwhile, the Illinois Department of Transportation issued an Illinois Aviation Economic Impact Analysis in December 2021, which found that the state’s airports annually contribute $95.5 billion to the state’s economy and support an estimated 492,768 jobs.

Several other state DOT studies – including ones from Georgia, Wyoming, and Alaska – also show that airports function as significant “economic engines” for their respective territories, as well as key mobility hubs for businesses and residents.

Utah DOT on Last Leg of I-15 Corridor Project