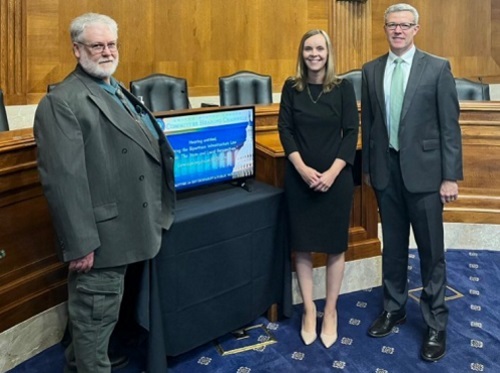 The Senate Environment and Public Works Committee held a hearing on September 21 to hear from states and localities regarding ongoing implementation efforts related to the $1.2 trillion Infrastructure Investment and Jobs Act or IIJA, enacted in November 2021.

Majeski noted that the IIJA’s resiliency provisions are proving valuable especially for states like hers facing a range of climate change impacts.

“As the lowest-lying state, Delaware is seeing first-hand the effects of climate change and sea-level rise,” she said in her remarks. “We are increasingly seeing roads in coastal areas overtopped with water, not just during significant storm events but due to tidal flooding on sunny days. We estimate that $1 billion of our existing infrastructure is vulnerable to the impact of climate change.”

“Having this bill finalized gives state DOTs and our contractor community certainty that we will continue to make needed infrastructure investments in the years ahead,” she said. “The $1.6 billion in federal funding that Delaware is receiving through the [IIJA] along with our committed state resources will allow us to deliver our largest capital program of ever of $4.45 billion over the next five years. This funding is instrumental to many initiatives in Delaware.”

West Virginia’s Wriston added that the IIJA bridge program, in particular, works “exceptionally well” in his state. “We are going to be able to operate within the guidelines of this program and take care of all the off-system bridges in poor condition – we think we can do all of them,” he explained in his testimony. “For decades, we as a nation have underinvested in our infrastructure and the results are very apparent to all of us. The passage of the IIJA is a shining bright spot, lighting a path to the future and clearly demonstrates a commitment to a better life for all our citizens.”

However, Wriston stressed that a lack of consistency regarding project guidance and other regulatory issues is hampering his state’s IIJA implementation efforts.

“The three big concerns of work force, supply chain and materials availability, as well as outrageous inflation are well known and most assuredly affects the federal agency levels as much as the entire country,” he added. “That is why a comprehensive IIJA delivery plan is called for and is much preferable to the piecemeal approach of the last year.”

AASHTO’s Tymon reemphasized the impact of inflation on state DOT projects – and on the transportation industry as a whole – in his testimony.

“State DOTs continue to struggle with the unprecedented impacts of inflation,” he stressed. “Huge increases in the cost of construction materials and severe supply chain disruptions are driving up the costs for projects and have the potential to wipe out the entire funding increase state DOTs received through IIJA. This will have negative effects throughout the industry, but the impacts of this will be especially devastating to small and disadvantaged business enterprises that lack the resources to absorb these unexpected costs.”

Tymon pointed out that those issues are in many ways exacerbated by new “Buy America” rules promulgated by the U.S. Department of Transportation.

“AASHTO and the state DOTs strongly support the intent behind the inclusion of the new Buy America requirements in IIJA [as] the expansion of America’s manufacturing capacity and the creation of new domestic jobs will encourage economic growth and make us a stronger nation,” he said. “At the same time, we firmly believe that it is in the public interest to implement these new Buy America requirements in a way that allows for the timely and successful delivery of critical infrastructure projects.”

The bottom-line, Tymon noted, is that some materials and products necessary for transportation and infrastructure projects are simply not made in the U.S. today.