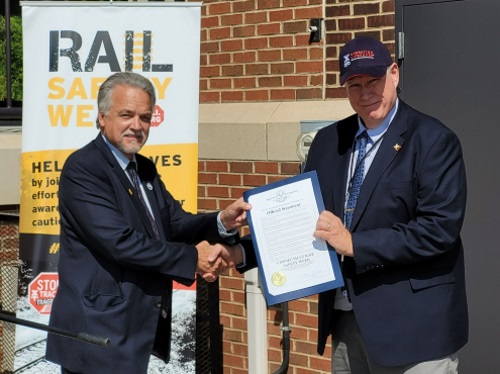 Across the country, state departments of transportation are engaging in a wide range of efforts to promote railroad safety as part of the annual Rail Safety Week outreach campaign, held this year across North America September 19-25 and sponsored by Operation Lifesaver Inc., Operation Lifesaver Canada, and the Mexican Association of Railroads.

“Rail Safety Week concentrates the public awareness and education campaigns that occur all year long across the country into one jam-packed week. Each day this week, Operation Lifesaver state programs will share rail safety messages in support of our core mission – to save lives,” said Rachel Maleh, executive director of Operation Lifesaver, in a statement.

“Each day focuses on a different audience with customized rail safety messages in support of our core mission – saving lives,” she said. “This annual event brings together Operation Lifesaver state programs, North American safety partners and our partners at the U.S. Department of Transportation along with the many other organizations who share the rail safety message – this week, and all year round.”

“I have worked in transportation and on the railroad virtually my whole career. And while we have made great progress in reducing the number of railroad collisions, the fact remains that every three hours in our country, a person or vehicle is hit by a train,” said Joseph Giulietti, commissioner of the Connecticut Department of Transportation, in a statement. “We are working every day with Operation Lifesaver to keep our communities safe.”

The Michigan Department of Transportation is also working to heighten rail safety awareness during Rail Safety Week. “In our distracted society, people may become complacent or might not understand the need for caution near railroad tracks and trains,” the agency said in a statement. “Pedestrians and drivers often simply do not realize that it is dangerous and illegal to walk on railroad tracks, nor how long it takes the average freight train to stop.”

The organization, which this year is celebrating the 50th anniversary of its founding in 1972, also recently opened the application period for its competitive Rail Transit Safety Education Grants, which offers a total of $200,000 in funding for transit agencies and government entities that provide transit service to conduct safety education and public awareness initiatives.

In a separate statement, Operation Lifesaver’s Maleh noted that the group caps grant amounts at $20,000 and requires non-federal matching funds of at least 25 percent of project costs. Those projects must focus on safety education or public awareness initiatives in communities with operating or planned rail transit systems – such as commuter rail, light rail, subway, and streetcar systems.

OLI noted October 17 is the deadline for grants applications, with awards announced December 1.

FHWA said in a statement those grants – made in coordination with the Federal Railroad Administration and Federal Transit Administration – would help fund a range of highway-rail crossing improvements, including: