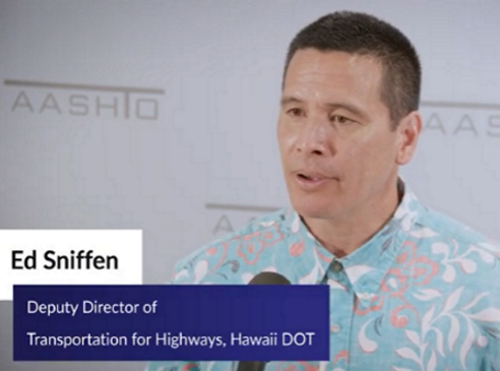 The American Association of State Highway and Transportation Officials recently released a video highlighting how the Hawaii Department of Transportation incorporates resiliency into its infrastructure strategy.

[Above image via AASHTO]

During the interview, Sniffen explained what making a transportation system “more resilient” means and how Hawaii DOT incorporates that philosophy into its infrastructure planning, construction, and delivery processes.

Sniffen is a recognized state DOT leader on the topic of resilience. For example, he participated in a knowledge session on infrastructure resilience hosted during AASHTO’s 2022 Spring Meeting in New Orleans.

Moderated by David Sweeney, president and CEO of engineering and architectural firm RS&H, the panel explored how “resilience” is becoming a critical factor in extending the overall lifecycle of infrastructure assets while also hardening them against potential damage from both natural and man-made disasters.

That knowledge session also included Marc Williams, executive director of the Texas DOT; Will Watts, assistant secretary for engineering and operations at Florida DOT; and Aimee Flannery, a surface transportation analyst from the Office of the USDOT Secretary.