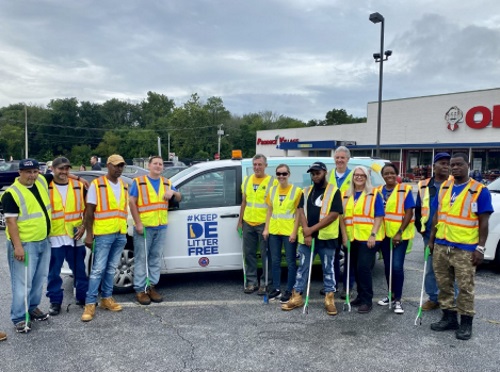 The Litter Free School Zone program encourages students to keep their school grounds litter-free and to raise public awareness regarding litter. Every school in the state is encouraged to join the movement to keep Delaware litter free.

“The Litter Free School Zone program asks children to ‘think globally and act locally,’ something that stuck with me from when I was younger,” Gov. Carney noted in a statement. “We know that children are the conduit to change and that we can help create positive lasting habits in our youth that will carry over past their time at school and into their communities. Picking up litter makes an immediate and noticeable difference. It connects us to each other and makes us feel part of something bigger.”

Meanwhile, Caltrans unveiled a public art display dubbed the “Trash Castle.” Comprised of litter, plastics, and metals collected from California’s stormwater system, it is part of the agency’s effort to educate state residents on stormwater pollution and ways to stop it at its source.

“Our hope is that when people see the Trash Castle, they will start to understand the scope of the problem and be moved to make a difference,” he said.

California artists Richard and Judith Lang created Trash Castle in partnership with Caltrans to help spread awareness about the effect of stormwater pollution on water quality.

Caltrans manages stormwater runoff and mitigates pollution within its 350,000 acres of right of way, which includes more than 15,000 miles of highway. This effort involves picking up roadside litter and clearing out storm drains to preserve roadway safety and drivability during all types of weather conditions, the agency noted.

State departments of transportation across the country are involved in a wide range of anti-littering efforts.

The creation of this campaign is one of the many recommendations made by Pennsylvania’s first-ever Litter Action Plan, released in December 2021. That plan also won a Pennsylvania Governor’s Awards for Excellence in May.

Meanwhile, in July, Ohio launched a new litter control program launched, one administered by the Ohio Department of Transportation, that seeks to broaden engagement by the business community in its trash removal efforts.

That new Ohio program allows businesses and groups to fund litter removal services along one-mile, one-direction segments of state highways. In exchange for their sponsorship, Ohio DOT displays the name of the business or group on a sign within their sponsored segment.

Concurrently, the Texas Department of Transportation recruited popular singer, songwriter, and actor Joe Jonas to star in a series of Public Service Announcements as part of the agency’s “Don’t Mess with Texas” anti-littering campaign.

The agency said the “show-stopping” performer – a former Westlake, Texas, resident – takes an “over-the-top” approach in the PSAs to remind folks to keep Texas roadways free of litter.