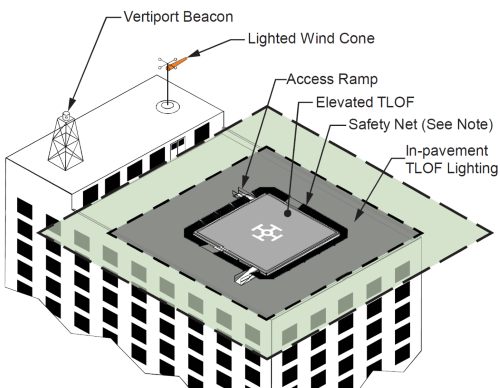 The Federal Aviation Administration recently released new design guidelines for “vertiports,” which are facilities built for the needs of advanced air mobility or AAM aircraft.

[Above image by FAA]

The FAA said these new design standards would serve as an “initial step” for airport owners, operators, and infrastructure developers to begin development of facilities that will support operations of electrically powered AAM aircraft that take-off and land vertically.

“Our country is stepping into a new era of aviation,” noted Shannetta Griffin, FAA’s associate administrator for airports, in a statement. “These vertiport design standards provide the foundation needed to begin safely building infrastructure in this new era.”

FAA noted that vertical takeoff and landing or VTOL operations aim to transport passengers or cargo at lower altitudes in rural, urban, and suburban areas. That is why the agency’s design standards include critical information for those environments, including:

State departments of transportation are also readying guidelines to manage VTOL aircraft as well as drone operations in rural, suburban, and urban environments.

For example, the Ohio Department of Transportation is playing a key role in developing technology to keep airspace safe for both “manned” and “unmanned” aircraft, while also establishing an AAM framework for autonomous aircraft operation statewide.

At low altitudes, detecting air traffic – including unmanned drones – with traditional radar is much more difficult due to the presence of ground obstructions such as trees, houses, cars, and other low-flying objects such as birds and insect swarms, the agency said.

As a result, Ohio DOT’s Office of Statewide Planning and Research along with its DriveOhio division has been working with the Federal Aviation Administration, the Ohio Unmanned Aircraft Systems Center, and Ohio State University, and industry to develop and deploy a “detect and avoid” system.

That system would track drones as a “public service” and keep them from colliding with aircraft that operate at lower altitudes like medical helicopters or crop dusters, the agency said.

A drone operator requests clearance to fly, as an aircraft pilot would; receiving permission to use the airspace from the FAA. Both drone pilots and manned aircraft pilots would be able to see each other and safely share the airspace.