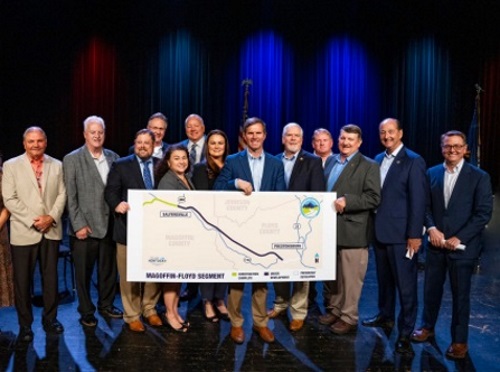 As part of a ceremony kicking off work on the last section of the multi-million Mountain Parkway Expansion project, the Kentucky Transportation Cabinet began construction on the first phase of a $4.1 million Dawkins Line Rail Trail project.

“We are delivering on a decades-old promise to complete a four-lane parkway from Winchester to far Eastern Kentucky,” said Governor Andy Beshear (D) in a statement. “We are building a parkway that is crucial to Appalachia’s strong economic future.”

“While our transportation crews continue to focus on restoring flood-damaged infrastructure in Eastern Kentucky, this project will improve safe use and access to this important recreational trail, which provides residents a safe place to exercise and unwind. The improvements also will promote economic development in the area,” said Gov. Beshear.

The Dawkins Line Rail Trail is a former railway, constructed in the early 1900s to haul timber, then later coal. Opened in 2013, it is the longest rail-to-trail in the state. The current 36-mile trail, managed by the Kentucky Department of Parks, in cooperation with KYTC, stretches from Hagerhill in Johnson County to Evanston in Breathitt County.

The trail’s rehabilitation effort occurs in two phases, with phase 1 including the paving of 24 miles of gravel trail from Johnson County to Magoffin County, paving two trailhead parking lots, and repairing drainage structures, signs, and bollards.

“By next summer, residents and tourists will enjoy the newly paved trail that expands access for more users to enjoy the scenic views,” said KYTC’s Gray. “We look forward to kicking off construction next month and advancing phase 2 in 2023 to close a gap in the trail near the Carver Tunnel.”