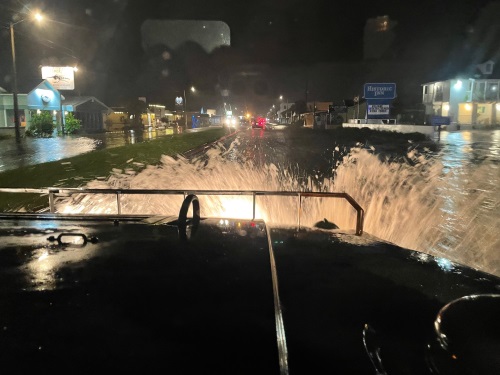 Florida is among several states coming to grips with the damage inflicted by Hurricane Ian, a Category 4 storm that struck Florida’s Gulf Coast on September 28 and is now tracking northward through Georgia, the Carolinas, and on into the Mid-Atlantic states.

[Above photo by the Florida National Guard]

Hurricane Ian made landfall in Cayo Costa with winds of 155 miles per hour, causing major flooding and tornado-like damage, according to a statement by the Florida Governor’s Office. The storm moved slowly across central Florida before exiting towards the north late on September 29.

Governor Ron DeSantis (R) received a major disaster declaration for all 67 counties statewide as well as for 100 percent reimbursement from the federal government up front for 60 days to ensure his administration could quickly move forward into response and recovery.

“Typically, this request is not made until disaster assessments have been made after the storm,” the governor said.

In an update provided by Gov. DeSantis on September 29, he said the electric grid for Lee and Charlotte counties likely needs rebuilding, along with the Sanibel Causeway. He also described Hurricane Ian’s devastation in the area a “500-year flood event.”

The governor’s office added that are currently 42,000 linemen responding to the more than 2.5 million reported power outages due to the storm, with power restored to more than 200,000 accounts in Southwest Florida since response operations began.

The Florida Department of Transportation noted it has dispatched 100 engineers working in teams of two to perform bridge inspections in areas hardest hit by Hurricane Ian. So far, the agency said its inspection teams have examined 197 bridges, with inspectors clearing 66 priority bridges in the areas most affected by the storm.

Florida DOT also noted that search and rescue operations got underway as soon as the storm passed, with U.S. Coast Guard and Florida National Guard as well as other state agencies participating in those efforts.

The Florida Highway Patrol also began escorting large convoys of utility and initial response crews into impacted areas as soon as the weather allowed, while assisting the Florida DOT with traffic control, bridge closures, and requests for high water vehicles.

Meanwhile, Georgia and South Carolina ramped up preparations for the arrival of Hurricane Ian’s remnants. Though downgraded to a tropical storm once it finished traversing Florida, the latest forecast indicated Ian could re-energize into a full-fledged hurricane.

North Carolina, for one, is preparing for the possibility of Ian powering back up to a category 1 hurricane before coming back ashore in the Carolina region.

“Hurricane Ian reminds us how unpredictable these storms can be and North Carolinians should be prepared when it reaches our state,” noted Governor Roy Cooper (D) in a statement.

“Heavy rains, up to seven inches in some areas, are likely to bring some flooding. Landslides are a threat in our mountains and there’s a chance of tornadoes statewide,” he added. “Coastal flooding and gusty winds are likely as the storm passes through. This storm is still dangerous.”

According to a statement from the Georgia Governor Brian Kemp’s (R) Office, the Georgia Emergency Management and Homeland Security Agency (GEMA/HS) State Operations Center is now at a Level 1 full-scale activation.

Teams from the relevant state agencies, including the Georgia Department of Transportation, deployed to counties affected by the storm, when appropriate, while also coordinating with Georgia’s utility providers, who have been staging equipment, inspecting the right-of-way paths of power lines, and preparing to respond to any power outages homes and businesses may experience.

South Carolina’s state agencies engaged in similar pre-storm actions as well, noted Governor Henry McMaster (R) in a statement. That included prepping South Carolina Department of Transportation workers in high impact areas to be available for 24-hour shift operations for the duration of the storm and aftermath.

“It’s still too early to know exactly how Hurricane Ian will affect South Carolina, but preparations at the state level are well underway,” the governor said. “We do know we’ll see a lot of rain and significant storm surge on our coastline over the coming days – now is the time for each South Carolina to make plans for every contingency and be prepared.”