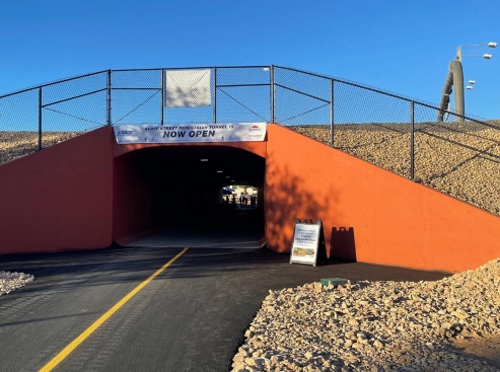 The Utah DOT, in partnership with the city of St. George, opened a new pedestrian tunnel to an additional and safer crossing for pedestrians and bicyclists on Bluff Street.

The new tunnel crosses under Bluff Street between Main Street and the southbound ramps at the Bluff Street/I-15 interchange. It connects the east and west sides of the Hilton Drive Trail, and improves connections to the trail network in the region.

“In St. George, walking and biking are not niche activities or sports,” said Michele Randall, St. George City mayor, in a statement. “They are integral pieces of our transportation system.”

“Our mission is to enhance quality of life through transportation by helping people get where they want to go, in the way they want to get there,” added Monte Aldridge, Utah DOT’s Region Four director. “This new pedestrian tunnel helps connect the community and boosts the economy by making it easier for people to get around by walking and biking.”

Meanwhile, in Nevada, reconstruction work is ongoing for the existing asphalt path on the southern side of U.S. 50 between North Lompa Lane and Airport Road.

That project will reconstitute the existing path as a concrete “shared use” trail featuring improved business access ramps. The new 10-foot wide path will enhance access and safety for pedestrians, bicyclists, and others traveling between residential areas and local businesses in eastern Carson City.

The path is part of Nevada DOT’s efforts to upgrade state roadways to current Americans with Disabilities Act requirements, the agency said in a statement.