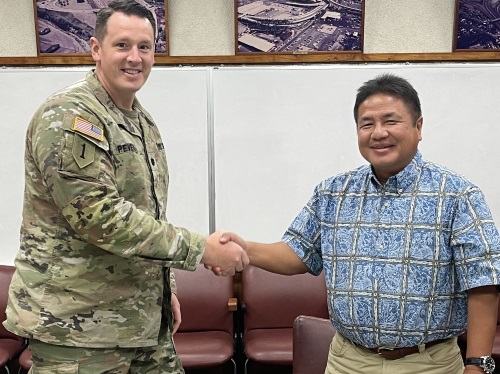 [Above: Lt. Col. Pevey (at left) with Jade Butay. Photo by the USACE Honolulu District]

The study, estimated to cost a minimum of $3 million, should take at least three years to complete, Hawaii DOT and USACE noted. They will split the cost of the study cost 50/50.

“Billions of dollars in goods come in through Honolulu Harbor every day. Hawaii’s largest harbor is crucial for the state and the entire South Pacific,” explained Jade Butay, Hawaii DOT director, in a statement. “Maintaining and upgrading Honolulu Harbor is a top priority and this new partnership with USACE will help us focus on this critical infrastructure.”

“This agreement emphasizes our collaborative partnership and supports our mission to deliver engineering solutions to the state of Hawaii and across the Indo-Pacific for generations to come,” added Lt. Col. Ryan Pevey, commander of the USACE Honolulu District.

Hawaii DOT has been making a major push to incorporate resiliency into its infrastructure strategies, as explained in a video recently released by the American Association of State Highway and Transportation Officials.

During the interview, Sniffen explained what making a transportation system “more resilient” means and how Hawaii DOT incorporates that philosophy into its infrastructure planning, construction, and delivery processes.

Sniffen is a recognized state DOT leader on the topic of resilience. For example, he participated in a knowledge session on infrastructure resilience hosted during AASHTO’s 2022 Spring Meeting in New Orleans.

He’ll be speaking a similar resilience topic during a session at the organization’s 2022 annual meeting this October in Orlando.

Oklahoma DOT Gets Approval for $8.6B Construction Plan