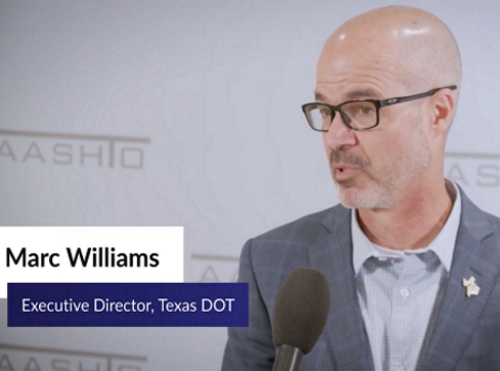 The American Association of State Highway and Transportation Officials recently released a video detailing the extreme weather response tactics developed by the Texas Department of Transportation.

“We’ve certainly seen some extreme events in Texas,” he explained in the video. “The winter storm we experienced two years ago saw the whole state of Texas below freezing. No one I’ve ever talked to at TxDOT had ever seen anything like that.”

As a result, Williams said TxDOT is updating its resiliency plans to ensure the state’s transportation systems can more effectively recover from such extreme weather events if they reoccur in the future.

Williams also served on a panel of state DOT and federal agency executives convened during the AASHTO 2022 Spring Meeting in New Orleans to discuss the integration of resiliency into infrastructure decision-making.

“This is not just related to winter,” he stressed during that knowledge session. “We faced Hurricane Harvey three years ago where it made landfall three separate times along the Texas coast. It used to be that we could rely on the size of Texas to pull crews and resources from one part of the state to help in another part of the state. Now everyone is responding at the same time.”

Williams said that is forcing TxDOT to rethink how it handles logistics and allocations of resources when it comes to weather response. Yet other issues, such as the COVID-19 pandemic and cyberattacks, are also creating similar statewide resiliency issues, he noted.

“That is forcing us to redefine what resiliency means and how we plan for it – and how it affects everything from land use to freight demand,” Williams pointed out. “So all of that is affecting our resiliency planning as well as our ‘lessons learned’ from such events. Going forward, it puts a premium on real-time information and the need to improve our IT infrastructure.”