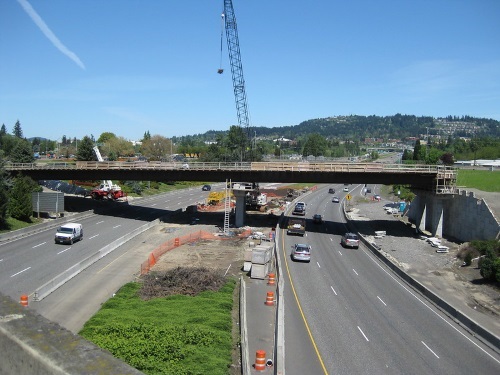 In a letter sent to the Federal Highway Administration on October 13, the American Association of State Highway and Transportation Officials acknowledged that “consensus support” is lacking for the greenhouse gas or GHG reduction framework proposed by the FHWA in July.

[Above photo by Oregon DOT]

In addition, many states are developing resilience improvement plans to holistically understand how they can make the transportation infrastructure more resilient to withstand the effects of extreme weather and climate change.

Yet despite “clear support” from both AASHTO and state DOTs for addressing climate change and reducing GHG emissions, there are a number of important concerns with the particular and definitive approach FHWA’s proposed in this NPRM, the letter emphasized.

The group stressed that those state DOTs in opposition to the NPRM want the FHWA either to not implement new rules or at the very least make substantial changes.

There are several other issues as well, AASHTO noted.

“First, in this NPRM, FHWA presents a case for legal authority to establish this new rule. From our review, we do not see a provision in federal law that requires FHWA to establish a GHG emissions performance measure,” the organization said. “In addition, FHWA’s [justification] of its legal authority for establishment of this new rule can lead to consequences beyond the intent of Congress, setting a precedent for future interpretations leading to establishment of new and additional performance measures without Congressional authorization.”

AASHTO also noted that the proposal includes new target-setting requirements that are not consistent with, if not contrary to, federal law and would represent a major departure from current practice—where FHWA would be directly involved in setting state-specific targets by establishing that GHG targets must remain constant or decrease and must achieve a specific long-term goal.

AASHTO also believes that calendar year 2021 is not an appropriate baseline FHWA’s GHG measure due to the steep falloff in vehicular traffic resulting from the COVID-19 pandemic.

“Specifically, we disagree with FHWA’s assertion that 2021 is the most appropriate base year since it is the most recent year for which data will be complete and available,” the group said. “Many states have evidence to show that their systems are still recovering and had not normalized by the end of 2021. In fact, many states see it to be probable that near-term vehicle miles traveled will continue to rebound closer to pre-pandemic levels, setting states up to struggle to meet targets that are not objectively reflective of ongoing system performance.”

Finally, AASHTO believes FHWA has “significantly underestimated the costs” it will take to implement this major rulemaking in terms of direct cost to state DOTs and metropolitan planning organizations alike. The agency also ignores the “opportunity cost” faced by state DOTs and MPOs of having to meet the targets established in the rule as well as the unintended costs associated with a funding model based primarily on the sale of petroleum-based fuels, which this proposed rule significantly reduces.