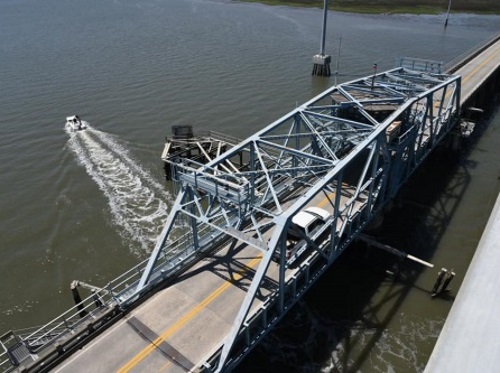 The Federal Highway Administration recently issued $18.4 million in “planning grants” as part of the first round of awards from its new Bridge Investment Program, created by the $1.2 trillion Infrastructure Investment and Jobs Act enacted in November 2021.

[Above photo by South Carolina DOT]

Those early planning grants, going to 23 projects in 23 states, will help fund early phases of project development to create a “pipeline” of bridge construction projects, noted Pete Buttigieg, secretary of the U.S. Department of Transportation.

“Bridges represent more than just their physical structures—they connect people and communities and make it easier to go about our daily lives,” he explained in a statement. “These grants will help communities across the country move forward to modernize their bridges and make it easier for people and goods to move quickly, reliably, and safely to their destinations.”

The agency noted that planning grants issued via its Bridge Investment Program seek to support projects in the “early phases” of project development, where eligible activities include planning, feasibility analysis, and revenue forecasting. By providing planning grants in addition to construction grants aids in the development stage of a project, FHWA added – whether a state, a city, or a local community owns that project.

The agency added that a total of $20 million in FY 2022 funding is available for bridge planning grants. However, FHWA said its reserving $1.6 million for projects identified under the upcoming Large Bridge Project grant awards that the agency said, “May be better suited for a planning grant than a construction grant.”

Five state departments of transportation – in Connecticut, Oklahoma, Oregon, Utah, and South Carolina – received planning funds from the FHWA during this first round of grants.

Christy Hall, secretary of the South Carolina Department of Transportation, noted in a statement that her agency received a $720,000 grant to cover the cost of bridge planning along I-95 over the Great Pee Dee River.

She noted South Carolina DOT’s grant proposal included planning projects for rehabilitating or replacing 12 rural bridges along the I-95 corridor in Marion and Dillon counties. Over the past five years, the SCDOT has spent approximately $15 million in infrastructure repairs to this portion of I-95: a route that serves as a major hurricane evacuation route and that also suffers from frequent flooding.

In addition to improving the safety of the corridor, the agency said those bridge projects would help improve the road network in the area, allowing the movement of freight from the Port to the Inland Port in Dillon and continuing across the region.