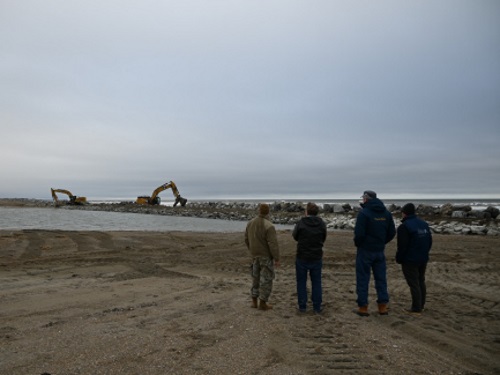 [Above photo by the Alaska Governor’s Office]

Those dollars will help offset costs for emergency repairs to roads and bridges damaged by widespread flooding along Western Alaska caused by Typhoon Merbok.

On September 15, Typhoon Merbok struck Western Alaska, producing hurricane-force winds, higher than normal tidal ranges, and storm surges of up to 10 feet above mean high water. This event caused wind damage, as well as, severe riverine and coastal flooding, to approximately 40 cities and villages along a roughly 1,300-mile-long section of the Western and Northwestern Alaska coastline.

“Our maintenance workers and airport contractors went to work before the winds died down – removing debris from our airports and roads and repairing our airport lighting systems,” he added. “We’re also working with the local communities to connect them with the state and federal resources they need to repair their local roads.”