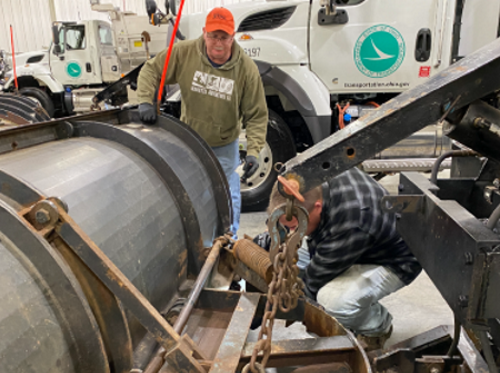 With leaves falling and the air turning colder, the Ohio Department of Transportation is preparing for winter operations.

That means the agency’s nearly 300 mechanics are busy doing 150-point checks on snowplow blades and salt spinners on each of the more than 1,600 trucks in Ohio DOT’s designated winter response fleet. Ohio DOT added that it already has 740,000 tons of salt on hand ahead the winter season.

Meanwhile, the agency is ramping up its recruitment efforts for snowplow operators. The agency said it employs nearly 3,000 drivers who often work 12-hour shifts during snow and ice events. While most are full-time drivers, about 500 drivers are seasonal hires.

“Our seasonal workers are vital for helping us clear the roads in a timely manner,” said Ohio DOT Director Jack Marchbanks in a statement. “Right now, we have job openings for these positions all over the state, and we encourage those who meet the minimum qualifications to consider coming to work with us.”

The agency also noted it uses “auxiliary drivers” for winter operations as well. They are full-time Ohio DOT employees who normally do other tasks and only plow snow when needed.

Ohio DOT crews maintain state and U.S. routes outside municipalities and all interstates in Ohio, except the Ohio Turnpike. The agency said its goal is to have primary routes back up to speed within two hours and secondary routes within four hours of the end of a snow event. Even with staffing shortfalls, last winter crews hit that goal 99 percent of the time.

“Keeping roads safe takes a great deal of work before, during, and even after snowstorms hit,” said Governor Mike DeWine (R). “We are grateful for the dedication of our ODOT crews who battle the elements year after year to keep our major roadways open and drivable.”

“We aim to be the standard of excellence when it comes to winter maintenance,” Marchbanks added. “That will never change.”