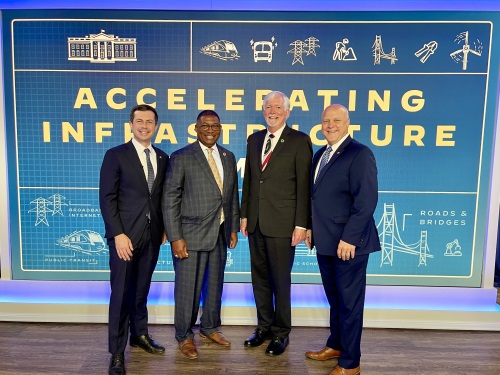 Two state department of transportation chief executives shared their insights during a virtual “Accelerating Infrastructure Summit” hosted by the White House on October 13.

The summit highlighted new resources for states, tribal, and local governments to aid in implementation of the $1.2 trillion Infrastructure Investment and Jobs Act (enacted November 2021) and the $739 billion Inflation Reduction Act (enacted in August). That includes the new ‘Promising Practices for Meaningful Public Involvement in Transportation Decision-Making’ guide compiled by the U.S. Department of Transportation, which was accompanied by an infrastructure fact sheet issued by the White House.

“We are not just building roads, bridges, and [water] pipes. We are building lives and livelihoods as well,” he stressed during remarks given at the summit. “This is not just about providing resources for bricks and mortar, but resources for data gathering, technology, and collaboration.”

Wilson and Millar also serve as the 2021-2022 president and vice president, respectively, of the American Association of State Highway and Transportation Officials.

“If we miss the mark on any of those three, that’s a setback for us; we lose the trust and confidence of the public and the problem we’re trying to fix not only persists; it only gets worse,” he stressed. “That’s why we must make sure when we fix it, we fix it right the first time.”

AASHTO serves an important role for states in accomplishing that goal, Wilson noted, as the organization serves as a forum for state DOTs to share best practices across numerous infrastructure activities – wryly referring to it as “a different kind of R&D” described as “rip-off and duplicate.” That form of R&D, Wilson emphasized, helps “ensure the entire country benefits from the [infrastructure] successes achieved by individual states.”

He also pointed out that, in terms of building better partnerships between federal and state agencies, there needs to be recognition that “no two states are alike” especially in terms of achieving infrastructure policy goals.

“That’s why it is incumbent upon us to build better federal/state relationships so we can work through and resolve differences,” Wilson said. “It’s about how we deal with risk; shared responsibility; and making funds available to help states deliver what is on the [infrastructure] mission table.”

Meanwhile, WSDOT’s Millar focused on critical “on the ground” issues when it comes to infrastructure projects – especially in terms of finding and keeping the workers needed to build and maintain it.

“There are three pillars to our strategy at WSDOT: Workforce development; diversity, equity, and inclusion; and resilience,” he explained. “Everything we do in terms of infrastructure flows through that lens – and we get it done through consistency and persistence.”

The workforce pillar is becoming a challenge as every state DOT – indeed, the nation as a whole – is experiencing a “generational transfer” as the baby boomers age out of the workforce.

“What young people want today is to do something that matters – and I tell them the work we do, as a state DOT, matters,” Millar noted. “Because what we need for our country to function is infrastructure that is safe, sound, and smart. Because our economy runs on that infrastructure and everyone in government and the private sector expects it to be there. We take it for granted that it will be there. That’s why we need to convince young people that there are good jobs and great opportunities in infrastructure.”