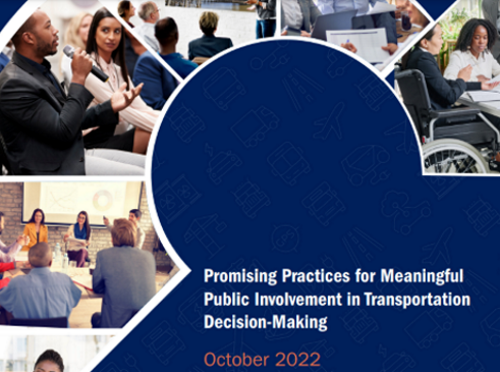 The U.S. Department of Transportation recently issued what it calls a “first of its kind” guide to conducting public involvement in transportation infrastructure projects for federal funding recipients and agency partners.

[Above image via the USDOT]

Dubbed “Promising Practices for Meaningful Public Involvement in Transportation Decision-Making,” the 105-page guidebook details ways state departments of transportation and others can encourage and maintain “meaningful public involvement” in transportation projects from start to finish.

USDOT said it collected information from multiple sources, including transportation stakeholders and communities, to identify and address “obstacles” to public participation in the transportation decision-making process. Challenges identified include the use of one-size-fits-all strategies and the lack of accountability for acting on community inputs, the agency said.

USDOT added that as it updates regulations and orders under related authorities, such as Title VI of the Civil Rights Act of 1964 and the National Environmental Policy Act of 1969, this new guide would help provide a common understanding of meaningful and effective public involvement practices.

In addition, as the new guide is a “living document,” the agency stressed that it welcomes feedback and input as well as real-life examples of funding recipients that have been able to implement these practices and will accept public comments to inform potential future updates.

State DOTs across the country are already engaged in a wide variety of efforts to improve public outreach and participation in the transportation projects they oversee.

For example, in 2019, the Oregon Department of Transportation launched a yearlong public outreach campaign to educate residents about transportation funding and the need for new ways to pay for the state’s roads and bridges.

Dubbed “Keep Oregon Connected” and funded in part with a federal grant, the campaign sought to explain the nature of the state’s transportation funding problem: namely, as more vehicles achieve better fuel efficiency, people are paying less in motor vehicle fuel taxes while using the road just as much.

“Most Americans are unaware of the degree to which prosperity, community vitality, and personal well-being depend on continued investment in the U.S. transportation system,” the study’s researchers found.

“Often this awareness arises only when the system is disrupted in some way, such as by road flooding, a transit service breakdown, bottlenecked freeways, or a bridge closure,” they said. “However, as states seek increased funding for infrastructure investment, a broader public understanding of the benefits of investment is essential to achieving public support.”