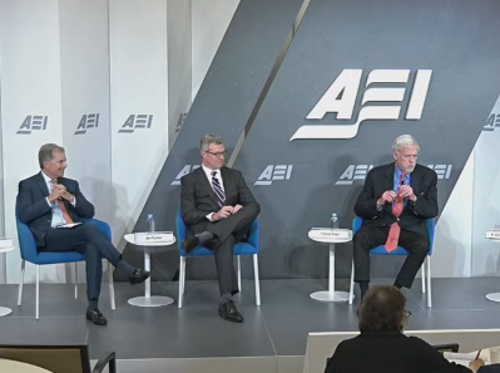 A forum hosted by the American Enterprise Institute on October 26 discussed how the $1.2 trillion Infrastructure Investment and Jobs Act and the $739 billion Inflation Reduction Act are set to affect the U.S. infrastructure now and in the future.

[Above image via AEI]

Mitch Landrieu, senior adviser to the president, kicked off the event with a back-and-forth discussion with R. Richard Geddes, non-resident senior fellow at AEI, explaining how those two pieces of legislation seek to improve U.S. road and bridge networks, airports, ports, and waterways, while expanding high-speed internet and “clean energy” programs across the country.

Landrieu also discussed the significant challenges President Biden’s administration faces in achieving the goal of this legislation, primarily the lack of an equipped workforce to design and build these crucial pieces of infrastructure. He also covered efforts to facilitate an efficient funding delivery system at the federal, state, and local levels while also finding ways to improve communication between levels of government and private entities.

“This is the largest infrastructure bill that the federal government has ever done and this is just a great opportunity for everyone across the country; not just for the transportation, but for other infrastructure sectors of the economy as well,” Tymon said.

“This is an important story to tell for what it means for people across the country as well,” he added. “A lot of folks like to say that Washington is broken; that Congress is broken; the executive branch is broken, that the courts are broken. But when you look at this [IIJA] bill, there is hope for people. It is one of the few bipartisan bills put together here over the last several years. As a result, it has a great balance in terms of what it is going to be able to deliver.”

Tymon noted the IIJA also addresses a lot of emerging priorities – resilience and climate change, for example – while also investing in traditional programs and priorities for the nation.

“I have to give everyone a lot of credit for being able to see the forest through the trees,” he stressed. “It is an important story to continue to tell, for it shows how we can get back to the way we used to get things done.”

From a state department of transportation perspective, Tymon noted that the IIJA has something in it for every state in the country.

Tymon added that the IIJA overall provides “great foundation” for building what he described as a “smart, safe, and sound” national transportation system that will be “resilient for generations to come.”