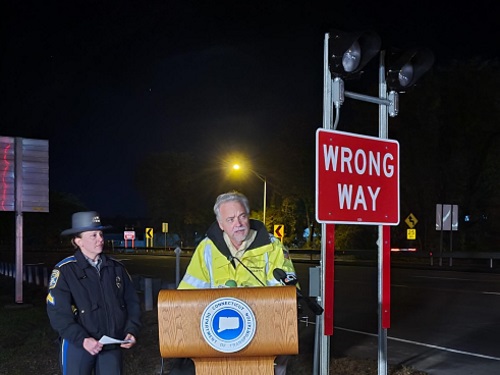 The Connecticut Department of Transportation recently held an event in conjunction with the Connecticut State Police, local law enforcement, and other officials to highlight the deployment of a wrong way driving detection system.

The event, held at a closed off-ramp on Queen Street in Southington, demonstrated the effectiveness of wrong way LED-flashing technology to stop a wrong way driver. Connecticut’s General Assembly recently provided $20 million in additional bond funds to the agency to accelerate the installation of wrong way flashing signage at high-risk highway ramps statewide.

“This year has been by far the deadliest year in recent memory, with 22 wrong way fatalities occurring on the highways,” noted Connecticut DOT Commissioner Joe Giulietti in a statement.

“In fact, 2022 exceeds the number of wrong way fatalities from the previous three years combined,” he pointed out. “With more than 85 percent of wrong way drivers found to be impaired, we need people to think twice before getting behind the wheel because one wrong move can be deadly.”

Over the past several years, Connecticut said it has been installing wrong way driving countermeasures on several key highway on/off ramps. To augment those efforts, the agency said it is will launch a pilot program in 2023 to install new wrong-way detection systems at 16 high-risk ramp locations across the state.

In September, the Kentucky Transportation Cabinet recently received $5.1 million in federal funds to pilot test a wrong-way driver detection system on select highways across the state.

KYTC said its “Wrong Way Driving and Integrated Safety Technology System” would use “cutting-edge” computing and video processing to implement a pilot program aimed at detecting and deterring wrong-way incidents by alerting the wrong-way driver, other drivers, and emergency responders.

In July, the Oklahoma Department of Transportation began pilot testing a wrong way detection and alert system on six ramps along I-40 in the eastern part of the state. Using thermal cameras, the system identifies when a vehicle enters an exit ramp in the wrong direction and displays flashing lights on already posted Wrong Way signs to increase noticeability.

In January 2019, the Nevada Department of Transportation installed and activated a wrong-way driver detection and alert system on U.S. 395 based on radar and closed circuit cameras that automatically detects vehicles entering a highway in the wrong direction, activating two sets of red flashing wrong-way signs on the ramp.

The Arizona Department of Transportation deployed a first-in-the-nation thermal-camera wrong-way vehicle alert system in the Phoenix area in 2017 – a system that received a national award in 2018. The agency is also enhancing and expanding its wrong-way driver detection system to other highway corridors statewide.