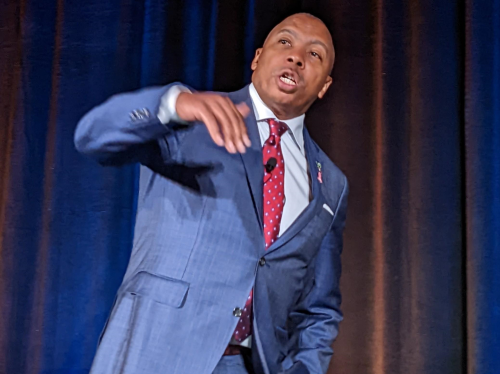 Making a difference is “the highest form of wealth there is,” according to Dr. Calvin Mackie (seen above), president and CEO of the nonprofit firm STEM NOLA. At the 2022 Annual Meeting of the American Association of State Highway and Transportation Officials, he called on attendees to make a difference in their communities through transportation.

“Engineers are purveyors of hope in the communities that they serve,” he said during the general session keynote address at the meeting in Orlando. “Because hope is not a four-letter word. Hope is real. Hope will whisper ‘maybe’ when the world is screaming ‘no.’ Hope is about creating safer and smarter communities for everybody.”

Born in New Orleans, he graduated in 1985 from McDonogh 35 High School – the city’s first high school for African Americans – and in 1990 earned a bachelor of science in mathematics from Morehouse College, followed by bachelor of mechanical engineering from Georgia Tech through a dual-degree program. He also completed a master’s in 1992 and a Ph.D. in 1996; both in mechanical engineering.

A motivational speaker and entrepreneur as well as an engineer, Mackie served on the faculty at Tulane University and as a visiting professor in the department of chemical engineering at the University of Michigan.

“I created STEM NOLA to give kids like me what my uncle gave me; hope and support,” he said. “The only way kids in 21st century will be ‘in the know’ is to take what we know and bring it back to them. Because why are we here? Are we in it just for the money? Or are we about making a difference?”

In the end, Mackie said building the workforce pipeline for the future is “everybody’s job” in the transportation industry.

“It takes 20 years to make an engineer,” he added. “But what they do is deliver hope and, eventually, impact lives through transportation. That’s all we are asking of you – give it your all for your communities.”