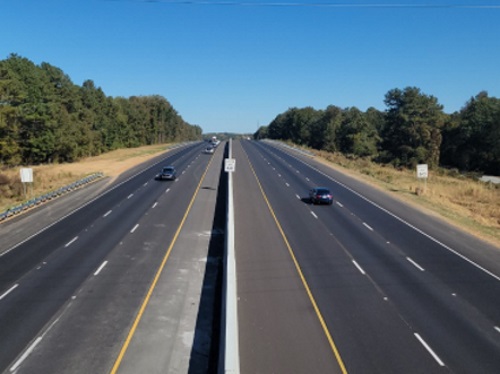 In partnership with Drivewyze and INRIX, the Georgia Department of Transportation is adding real-time traffic alerts to its Smart Roadways highway safety program for truck drivers.

[Above image by Georgia DOT]

The Georgia alerts, available at no cost to commercial truck drivers, cover more than 500 miles of roadways, including along I-75, 1-95, and I-16.  The alerts display fully automated messages such as “Sudden Slowdown Ahead” and “Congestion Ahead” two to three miles before the slowdown begins on in-cab equipment like Electronic Logging Devices or ELDs that have the Drivewyze platform installed.

In a pilot test in the Atlanta area, with more than 500,000 vehicle “visits” comparing those who received and didn’t receive alerts, results showed between a 10 percent and 16 percent reduction in hard braking incidents. Another study on I-95 found that drivers who received sudden slowdown alerts reduced their speed an average of 11 mph, with an average 8-mph reduction when alerted about traffic congestion.

“We recognize real-time safety messaging as a key strategy to minimize crashes due to unexpected slowdowns,” said Ben Lempke, assistant state ITS engineer for Georgia DOT in a statement.

“This messaging becomes even more critical when you factor in the additional stopping distance required for trucks and the seriousness of truck-involved accidents,” he added. “Our partnership with Drivewyze has been influential in our goal to deliver safer roadways for all travelers.”

“When you consider that 30 percent of all crashes are on interstates — and many are secondary incidents where a truck or car rear-ended a vehicle that was in queue from the initial crash – it highlights the importance of these alerts,” said Brian Heath, CEO of Drivewyze.

“We’re thrilled that Georgia is now working with us to improve highway safety,” he noted. “This partnership helps us expand our safety footprint by delivering truckers a heads-up on unforeseen slowdowns along several key interstates. Having ‘visibility’ to slowdowns ahead of time can help prevent secondary crashes from occurring.”

In addition to Georgia, Smart Roadways Heavy Congestion and Sudden Slowdown alerts are currently available in North Carolina, Ohio, New Jersey, and the Pennsylvania Turnpike, covering more than 3,500 miles of the most traveled freight corridors.