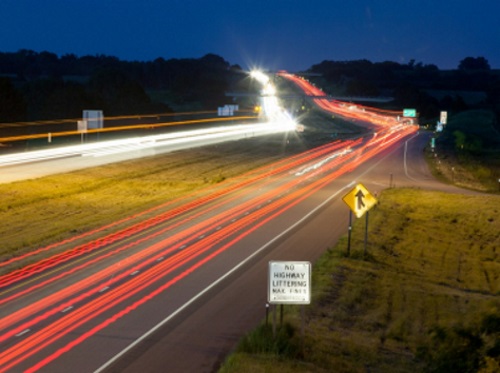 The Governors Highway Safety Association, in collaboration with General Motors, recently provided a total of $210,000 to seven states to help combat distracted driving.

[Above photo by the Nebraska DOT]

Each of those seven states – Colorado, Kentucky, Maryland, Massachusetts, Missouri, Montana, and Nebraska – received $30,000 to implement recommended actions outlined in a comprehensive report released by GHSA and GM earlier this year.

Distracted driving is rampant on U.S. roads, GHSA noted. The National Highway Traffic Safety Administration estimated that 3,142 people died in distraction-related crashes in the U.S. in 2020, the most current year for which data are available, with another 400,000 people injured annually.

This infusion of funds from GHSA and GM should enable those states to test new initiatives and expand successful programs, including working with survivor advocates to put a face on the distracted driving problem, collecting stronger data to advocate for enhanced laws and educating the youngest road users to help make distracted driving culturally unacceptable.

Those prevention programs are expected to serve as a model for other states and their partners seeking to expand their efforts to help change the cultural norm, so that distracted driving is completely unacceptable, noted GHSA Executive Director Jonathan Adkins.

“This is the perfect time of year to launch these initiatives,” he explained in a statement. “The sun sets earlier, so it is imperative that drivers keep their eyes and minds on the road, and their hands on the wheel. Our most vulnerable road users – children trick-or-treating or walking home from after-school activities – are in particular danger due to distracted drivers. We’re thrilled to be working with GM to support these critical state programs.”

State departments of transportation across the country are already working on a variety of efforts to stop distracted driving.

The California Department of Transportation, in partnership with the California Office of Traffic Safety, launched a statewide education campaign and video contest in April that encouraged motorists to “Get Off Your Apps” and put the phone away while driving.

Additionally, in September 2021, the Ohio Department of Transportation and the Ohio State Highway Patrol teamed up to establish a second distracted driving safety corridor along a 12-mile stretch of State Route 161/State Route 37 between New Albany and Granville in central Ohio’s Licking County. The first such safety corridor launched by the two agencies in August 2020 significantly reduced distracted driving-related crashes as well as fatalities and injuries resulting from those crashes during the first five months of its existence.