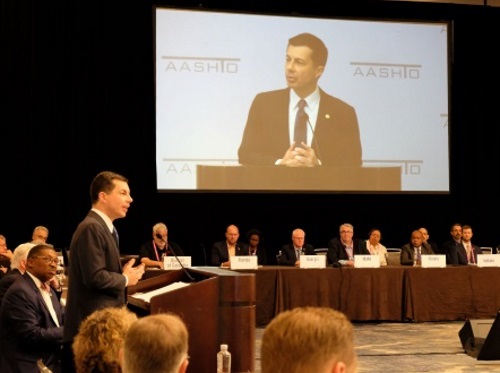 Pete Buttigieg (seen above), secretary of the U.S. Department of Transportation, is looking to states for help in reducing what he describes as a “shocking” number of annual roadway fatalities. That is just one of the many points he made during a wide-ranging talk at the 2022 Annual Meeting of the American Association of State Highway and Transportation Officials.

“We have to take responsibility for the fact we have a shocking number of roads deaths in our country,” he stressed. “We act like it is normal, but it is not. We cannot let it go on.”

While Buttigieg noted the USDOT developed its National Roadway Safety Strategy or NRSS, unveiled January, to address the increase in roadway fatalities that has occurred over the last few years, he is looking to state departments of transportation to incorporate safety more broadly into all aspects of their work.

“Please think about this, though I know you already do: Not just dedicated highway safety dollars but every penny [of state transportation funding] could and should do something about transportation safety,” Buttigieg emphasized. “There are many choices you make that impact safety: The way a road runs, the way interchanges work, providing more pedestrian and transit options. There are lives at stake. In the military, if you save three lives on the battlefield, you win a medal. Yet everyone at this table has a chance to save hundreds of lives every day.”

In the end, Buttigieg said USDOT’s goal when it comes to roadway safety is to “get to a place one day where deaths from traffic crashes will seem as quaint and strange as deaths from cholera.”

The USDOT secretary touched on other transportation topics as well during his talk, from USDOT’s effort to update “Buy America” rules for construction materials and other goods to the long-term infrastructure vision of President Biden’s administration.

“We are living through one of the most sustained and complex set of transportation disruptions in post-war epoch with the exception of 9-11,” Buttigieg explained. “What we are building now will serve us for generations. And states are responsible for deploying vast majority of our nation’s infrastructure funds, cooperating across geographic boundaries to deliver transportation system that supports everyone in this country.”

He noted that in many ways this is “both the best of times and the toughest of times to work in transportation” especially in terms of the effort to implement hosts of projects funded through the $1.2 trillion Infrastructure Investment and Jobs Act or IIJA enacted in November 2021.

“The last time we got together I noted that the ‘hard part,’ passing the IIJA, had ended with the harder part – IIJA implementation – now beginning,” Buttigieg said. “I appreciate how quickly you [state DOTs] are bringing projects to life. With your help, Washington delivered IIJA funding. Now we need you to help make a profound difference in people’s lives.”

He pointed out that USDOT’s proposed changes to “Buy America” rules are one way the Biden administration seeks to build “generational wealth” among communities underserved or overlooked by infrastructure endeavors in the past.

“This is a major commitment for us, for it’s not called the IIJA with ‘Jobs’ in the title for nothing,” Buttigieg noted. “We also feel and understand the pressure you feel – to get stuff done quickly and done with American products. We also know the right thing won’t happen without the right kind of push. But we must also make sure it is a constructive push. I’m not promising that everyone will agree with that, but we’re committed to when you bring data and experience to the table about Buy America’s impact on you, we’ll  take it very seriously. Because we want to make sure we create a productive level of American manufacturing through this.”

Part of that manufacturing effort entwines with new views of the planning process for infrastructure projects as well, Buttigieg noted. “We need to be thinking as creatively as possible how highway right-of-ways can be ‘twinned’ with [broadband] cable and transit [infrastructure] needs. We need to look for the whole package.”

He also said putting the focus on underserved and rural communities, through either formal or informal interactions with state DOTs, is critical to making such multi-faceted infrastructure projects work. “It’s best if a project’s position reflects a local-state-federal harmony. Because I think we all agree the more ‘buy-in’ we can get from local communities, the better off project planning and construction will be. These are very real challenges, of course. But now we get to sink our teeth into them.”