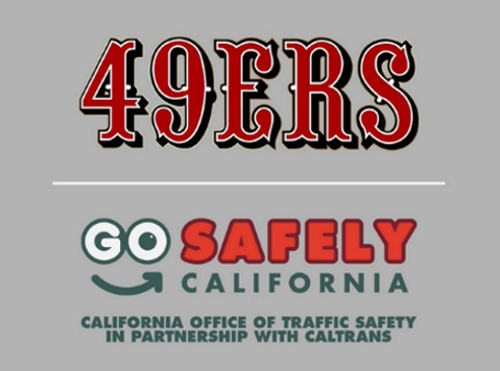 [Above image via Caltrans]

For the remainder of the 2022 NFL season, the 49ers and Levi’s Stadium will promote the “Go Safely” road safety plan across digital and social channels including 49ers.com and LevisStadium.com.

“One of our organization’s highest priorities is fan and employee safety, which isn’t limited to just at Levi’s Stadium or just during the football season,” said Jim Mercurio, 49ers executive vice president and Levi’s Stadium general manager, in a statement.

“Road safety is such an important message, so we are more than happy to use our platform as community leaders to be mindful and encourage safe driving habits throughout our region,” he added.

Additional messaging will focus on highway work zone safety, emphasizing the importance of slowing down and being extra aware when approaching and passing by roadside workers and emergency responders.

“Just like the offensive line protects the quarterback, [49ers fans] can help protect our highway workers and everyone on the road by choosing a sober way to get home,” noted Tony Tavares, director of Caltrans.

“And when you see a Caltrans truck, flashing amber lights or traffic cones, have our workers’ backs by slowing down, paying attention and being work zone alert,” he said.

In a similar vein, several state departments of transportation across the country collaborate with current and former NFL players to promote a variety of road safety messages.

“From the basketball court to the roads of Wisconsin, the ‘Control Your Drive’ message is ​universal,” Portis said in a statement. “I hope Bucks fans – and all drivers – who see our new video will remember it every time they get in a vehicle and keep their focus on driving safely.”

The Wisconsin DOT has also collaborated with former Green Bay Packer Wide Receiver Donald Driver over the last several years to play a role in its annual “Click It or Ticket” seat belt safety campaign.

As Wisconsin DOT’s “Click It or Ticket” spokesperson for the agency’s 2022 campaign, Driver also starred in an animated video as part of that outreach effort.

That “Rules to LVE By” campaign focused on the importance of wearing a seat belt at all times while in a vehicle.