AASHTO Hurricane Panel: Support is the Key to Recovery 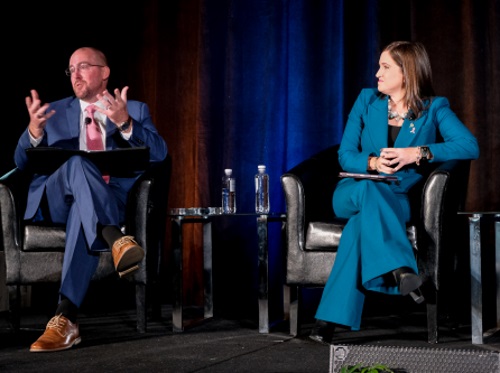 A panel of state department of transportation and Federal Highway Administration leaders recently discussed some of the lessons learned from hurricane recovery efforts undertaken by Florida and Puerto Rico.

Dr. Shawn Wilson – secretary of the Louisiana Department of Transportation and Development as well as immediate past AASHTO president – moderated the discussion.

“One of the challenges we face in Florida is how storm predictions and forecasts differ from what actually happens,” explained Florida DOT’s Perdue. “The forecast never truly lines up with reality; and that is half the battle when it comes to storm preparation.”

Therefore, while his agency deploys equipment, resources, and personnel based on the initial forecast of the storm track, Perdue said they are all “poised to shift” in case its path changes. “The reality is we need to be there the second after the storm passes, to evaluate damage and begin recovery efforts,” he said.

Hurricane Ian, which struck Florida’s Gulf Coast in late September, proved to be one such “shifting” storm – changing its path towards the south into the Fort Meyers area at the last minute.

That shift put offshore communities in that area – especially Sanibel Island – directly in the path of Ian’s fury. “Communities on Sanibel and other islands there suffered almost a total loss; there was upwards of 10 to 12 feet of water in some of those homes,” Perdue said.

However, the key to the rapid recovery efforts Florida DOT and other state agencies launched after Hurricane Ian passed – the Sanibel Island causeway was rebuilt and reopened in just a little over two weeks after Hurricane Ian destroyed it – came down to unified support across all levels of government and private industry, Perdue said.

“The spirit of cooperation proved invaluable,” he explained. “Federal, state, and local leaders along with contractors and other business partners sat down and made decisions in hours that usually take six months. The FHWA in particular was there every step of the way. We didn’t have a plan to fix the causeway; we went in to see what happened, figured out in a few hours who was going to do what, and executed the contract. I’ve never seen such roadway damage yet our industry led a convoy of vehicles across the new causeway in just 15 days.”

“While you are out there clearing and preparing roads – we need to come along and provide support,” he said. “It’s about providing money needed right away for repair costs and we make it a very quick process [so states] can start paying for things now.”

He pointed to the $50 million in “quick release” Emergency Relief or ER funds issued to Florida DOT as an example of that fiscal support; money that serves as a “down payment” to offset costs of repair work for damage caused by Hurricane Ian.

Vélez-Vega also stressed the vital importance of federal fiscal support for the series of hurricanes that pummeled Puerto Rico over the last several years, including Hurricanes Irma and Maria in 2017 and Hurricane Fiona in 2022.

“We’ve had our share of hurricanes over the last five years and we’ve had a lot of federal help to recover from them,” she said. “Over the last two or three years, those storms have changed the project map in Puerto Rico. It is a big change but we are moving along. Cash is very important for getting repairs done. It takes time and a lot of money and we are still in recovery from them.”