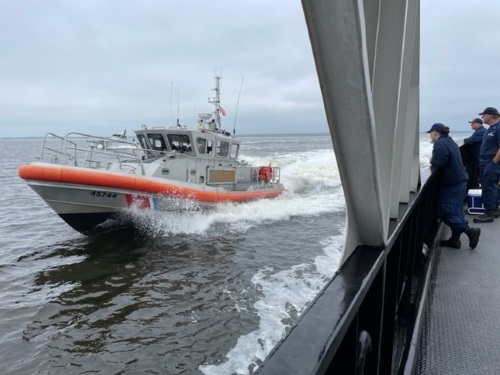 The North Carolina Department of Transportation recently hosted a training session for state, federal, and local law enforcement agencies on how to respond effectively to an emergency aboard a state ferry.

The training included a simulation of law enforcement and emergency response to an active shooter incident on board a ferry as it cruised along the Neuse River near the Cherry Branch terminal.

That session also served as part of a series of required trainings aimed at ensuring that law enforcement teams know how to conduct a coordinated and timely response to a major incident on a ferry.

“Our number one priority is to ensure we’re doing everything we can to keep our passengers and employees safe,” explained Harold Thomas, director of the NCDOT Ferry Division, in a statement. “Multi-agency, coordinated emergency exercises such as these are standard operating procedure.”

[Editor’s note: The North Carolina Ferry System celebrated its 75 anniversary of operation in 2022, hosting an event to honor that operational milestone at the Hatteras Ferry Terminal in May.]

NCDOT noted that no passengers were aboard the ferry during the exercise and no interruption to the state’s ferry operations occurred.