NYSDOT Ahead of Schedule on Multimodal Project 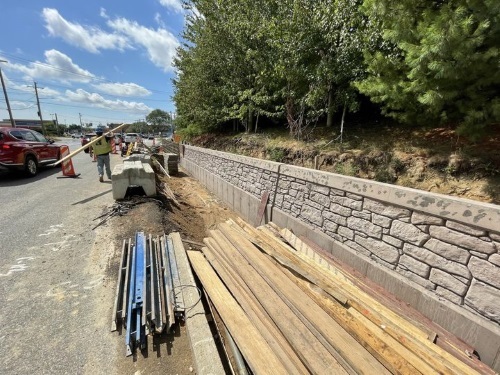 The New York State Department of Transportation is ahead of schedule on its $71.4 million project within the 12-mile State Route 347 corridor in the towns of Smithtown and Brookhaven; expanding the roadway’s travel lanes while improving accommodations for bicyclists, pedestrians, and buses.

[Above image via NYSDOT]

NYSDOT added that this specific project – which is more than a third of the way complete – is part of a broader $200 million multimodal effort within the entire State Route 347 corridor create new travel lanes, traffic signals, crosswalks and other roadway enhancements.

State Route 347 has grown over the decades from a 1950s farm delivery route into a major east-west corridor for Long Island motorists, connecting North Shore communities like Port Jefferson and Stony Brook with more direct access to the state parkway system.

“We are taking bold steps toward transforming our infrastructure by reimagining what a modern transportation system means for Long Island,” noted Governor Kathy Hochul (D) in a statement.

“Our investments along the State Route 347 corridor will make commuting safer and more efficient for Long Islanders and visitors alike … to better meet the needs of drivers, bicyclists, and pedestrians,” she added.

A new, wider roadway with raised planted medians is part of the current phase of construction, as are enhanced bus stops with pull off areas and shaded pedestrian shelters, solar powered lighting, and highly visible crosswalks with pedestrian countdown timers. Timing of traffic signals will also be coordinated to reduce traffic congestion, NYSDOT noted.

NYSDOT Commissioner Marie Therese Dominguez pointed out that her agency is “actively exploring” ways to accelerate future construction phases along the corridor.

“While we actively look at ways to accelerate future phases of the [State Route] 347 project, we are also making significant progress on the current phase,” she said. “Infrastructure is a springboard for economic opportunity and we are seeing that firsthand … [as we] transform New York’s infrastructure to meet the needs of all users of the road.”