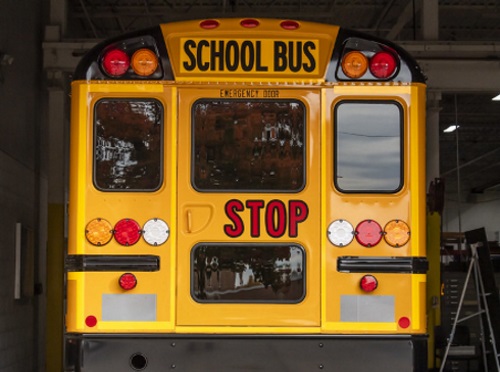 The Ohio State Highway Patrol (OHSP) and Ohio Department of Transportation are leading an effort between multiple state agencies and private sector businesses to make Ohio school buses more visible to other motorists and safer for the 1.6 million students transported on them.

The OSHP, the Ohio DOT, and Ohio Department of Education (ODE) collaborated to create new highly reflective “STOP” decals for the rear of every school bus in the state.

In the coming months, schools can affix those decals – made by the Ohio DOT Sign Shop at no cost to the schools – to each of the state’s nearly 20,000 school buses to make buses more visible in both daylight and at nighttime, the agencies said.

“This simple step to make Ohio’s school buses more visible will make a big difference to prevent rear-end crashes and protect both our kids and other motorists,” said Governor Mike DeWine (R) in a statement. “I commend our traffic safety teams who regularly go above and beyond to look out for those traveling on Ohio’s roads.

Troopers in the OSHP’s Licensing and Commercial Standard Unit came up with the decal idea; highlighting a need for increased school bus visibility. The agency said that, since 2017, there have been 6,519 school bus-related crashes. Of those crashes, 1,421 involved a driver following too close and 712 involved a driver failing to yield.

Those troopers then worked with the Ohio DOT, ODE, decal manufacturers, and various safety committees to vet the idea. During their research, Ohio troopers found no other state offering such a safety mechanism.

Nine school districts in Ohio piloted the decals on their buses and completed a survey to report their results. Of the eight districts who responded to the survey, all believed the new reflective signs were more effective than the standard, non-reflective “STOP” decal currently displayed on the rear of school buses.

All the districts also indicated the reflective “STOP” decal would improve school bus safety in dusk/dawn lighting conditions and in rain.

“I am beyond proud of the troopers and professional staff who worked tirelessly to see this through,” said Colonel Charles Jones, OSHP superintendent. “Their dedication will have a positive impact on the students who rely on buses to transport them to and from school and school-related events safely each day.”

“When the Patrol reached out to us with this idea, we were happy to help make travel to and from school safer for our children,” added Ohio DOT Director Jack Marchbanks.