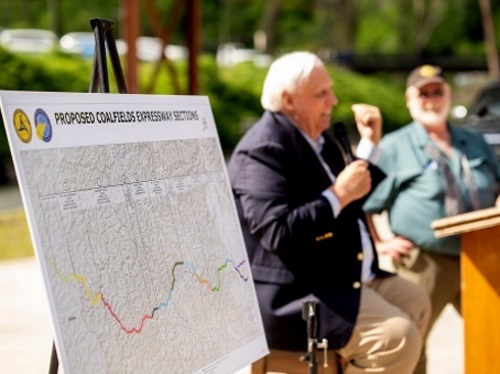 To mark the five-year anniversary of the $2.8 billion ‘Roads to Prosperity’ highway and bridge construction and maintenance program, two state agencies are creating a “cultural exhibit” to highlight the 1,263 projects funded by the program to date.

“The exhibit shows the extent of the work, in depth,” said Randall Reid-Smith, commissioner of Arts, Culture, and History in a statement. “I especially love the panel that shows the photos of the equipment, and the way Division of Highways employees have the equipment they need now to do the work.”

The exhibit resulted from a challenge issued by Reid-Smith on episode 21 of the “WV on the DOT” podcast to WVDOT Secretary Jimmy Wriston, to work on a special collaborative exhibit for the “Roads to Prosperity” program – crafted by the administration of Governor Jim Justice (R) and passed by the state legislature in 2017.

To date the program has funded construction and rehabilitation of 26 different sets of bridges on I-70 around Wheeling as well as continued progress on West Virginia’s portion of the Appalachian Corridor H highway network. The program also supported work on the Coalfields Expressway while increasing maintenance and repair for hundreds of miles of secondary roads across the state.

Wriston noted that every single transportation project undertaken by WVDOT undertakes must go through Arts, Culture, and History for historic, cultural and archaeological review before it can proceed.

“You really can’t overstate the role that Arts, Culture and history plays in the development and delivery of highway projects,” he explained. “They’re involved in every single project.”