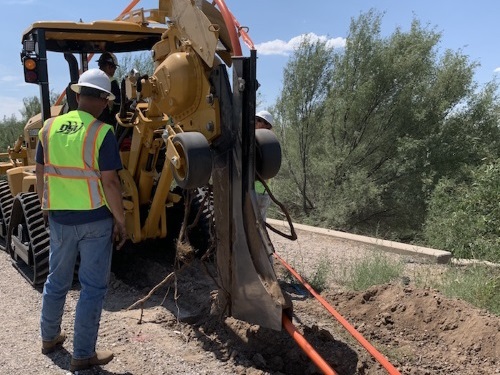 The Arizona Department of Transportation is working to bring broadband internet access to more of southern Arizona by laying 63 miles of fiber-optic conduit along I-19 from Tucson to Nogales.

The $15 million project began in September and involves crews laying fiber-optic cable along the agency’s right-of-way on I-19. The project should wrap up in early 2023, Arizona DOT said.

This project is part of Arizona’s broadband initiative, launched in January 2021, wherein Arizona DOT and Arizona Commerce Authority are collaborating to offer a wider array of rural communities with affordable high-speed internet service. Arizona DOT’s role in the initiative is to provide access to its right-of-way along the four main interstates in Arizona to place fiber-optic conduit for rural internet providers.

In addition to boosting rural broadband connectivity, the agency said in a statement it plans to use the fiber to provide “smart highway” technology, such as overhead message boards, traffic cameras, weather stations and wrong-way driving detection technology. The infrastructure also will help lay the groundwork for emerging technology like connected and automated vehicles.

Arizona DOT’s work on installing fiber-optic cable is part of a growing national trend that links the ability to expand broadband access to leveraging assets such as highway rights-of-way – especially for rural residents.

The American Association of State Highway and Transportation Officials recently provided suggestions to the U.S. Department of Commerce on how to improve the role state departments of transportation play in broadband projects.