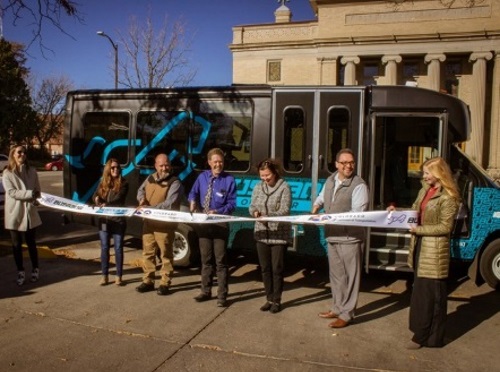 The Colorado Department of Transportation recently added a new route to its Bustang Outrider service, fulfilling demand for transit connections between the cities and towns of northeastern Colorado, the Front Range, and other areas of the state.

The Sterling-Greeley/Sterling-Denver route will operate five days a week, pending demand for weekend service, following the same payment model as other Outrider routes, with a price point of 17 cents per mile. Seniors (65 years and older), children aged two to 11, and disabled individuals ride the bus at half price. Caretakers for disabled individuals and children younger than two years old ride free.

“We’re thrilled to provide this connection so that people in northeastern Colorado have another transportation option to travel to the Denver Metro Area and beyond. This service improves access to medical facilities, recreation activities, DIA, and much more,” said Amber Blake, director of Colorado DOT’s transit and rail division, in a statement.

“Bustang Outrider’s mission is to provide connectivity and increased access to transportation options in every region across the state, and this [new] route is a valued addition to our transit transportation network,” she added.

Blake also pointed out that the primary objective of the Bustang Outrider service is to provide a transportation alternative for travel between rural communities and the state’s larger cities and towns. It includes collaborating with local agencies to ensure Coloradans get reliable bus service, convenient connections, and consistent fares, she said.

This is the latest expansion of the transit services offered by Colorado DOT.

In May, the agency launched a new express shuttle bus dubbed “Pegasus” to provide passenger service along the I-70 mountain corridor.

A Pegasus shuttle bus seats up to 11 people, is wheelchair accessible, and equipped with USB ports, power outlets, and Wi-Fi. Each vehicle also has luggage storage, bike racks and ski/snowboard containers, the Colorado DOT said.

The agency also noted its transit services provided along the I-70 mountain corridor – including its Bustang, Outrider, Snowstang, and new Pegasus shuttle – received high marks from passengers in a recent survey.

Over 90 percent of the respondents to that survey – commissioned by the I-70 Coalition, a non-profit organization representing 28 local governments and businesses along Colorado’s I-70 mountain corridor – responded positively about safety, customer service, and the overall travel experience associated with Bustang and Snowstang bus service.

Additionally, according to the survey, possible ridership motivators for so-called “Front Range” travelers using the Pegasus shuttle service include more pickup and drop off locations (63 percent), more frequency (59 percent), and the ability to make reservations (56 percent).