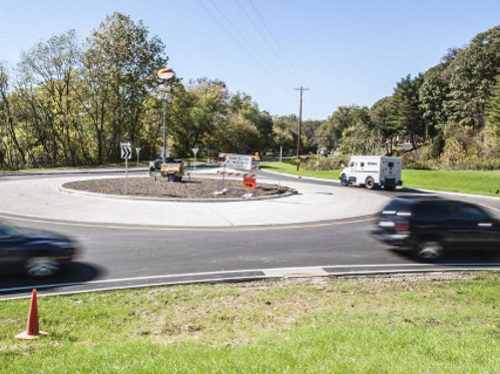 Governor Mike DeWine (R) and the Ohio Department of Transportation recently detailed the specifics of $121 million in new statewide traffic safety projects, including the installation of some 24 roundabouts in numerous Ohio counties.

Overall, that funding will support project development, right-of-way, and construction of 50 projects in 32 counties across the state. In addition to the roundabout projects, other safety projects include pedestrian crossings, traffic signal upgrades, and turning lane improvements.

Ohio DOT noted that funding for all of those projects comes through the agency’s Highway Safety Improvement Program.

That follows investments of $51 million in state and federal funds into new traffic safety improvements across Ohio in May to address a steep increase in pedestrian-involved traffic crashes and fatal roadway departures on state and local roads.

“A top priority of my administration has been making travel in our state safer – particularly at Ohio intersections that are known to be dangerous,” said Gov. DeWine in a statement.

“Studies show that roundabouts significantly reduce the likelihood of serious or deadly intersection crashes, so we’re investing in these projects today to save lives in the future,” he added.

According to Ohio DOT, there were only six traffic deaths at Ohio roundabouts from 2017 to 2021 compared to 1,126 deaths at an intersection controlled by a traffic signal or stop sign over that same four-year period.

Those safety investments are the latest emanations from plans the governor outlined in April to invest nearly $2 billion on 829 transportation projects statewide as part of the Ohio DOT’s construction season plan for 2022.

Since 2019, Ohio DOT said it has invested nearly $6 billion into more than 2,800 transportation projects, with more than $450 million spent on safety projects like Safe Routes to School. That also includes nearly 400 pedestrian safety projects in Ohio’s eight largest cities where pedestrian-involved crashes are far too common.