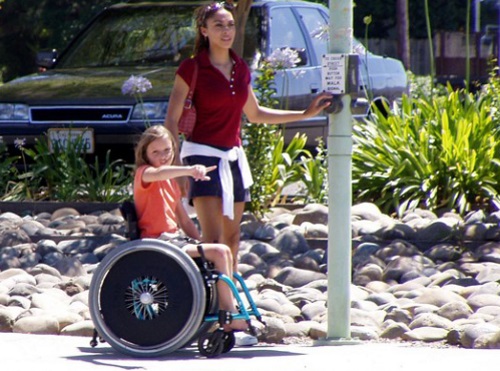 The American Association of State Highway and Transportation Officials sent a 13-page letter to the U.S. Department of Transportation on November 15 to provide feedback on the agency’s recent federal register notice regarding ways to enhance the safety of “vulnerable road users” or VRUs at intersections.

[Above photo via the FHWA]

“For far too long, we have seen a tragic loss of life on our nation’s roads and streets, and the recent significant increases in traffic fatalities are even more disheartening,” the group noted in its letter. “Every state department of transportation in the nation and the AASHTO community stand ready with USDOT to do everything in our power to make our roads safer.”

[Editor’s note: In October, the Federal Highway Administration issued new guidance to help states better protect “vulnerable road users,” such as pedestrians, cyclists, and people who use wheelchairs – people who accounted for approximately 20 percent of the 42,915 killed in motor vehicle crashes in 2021, according to the National Highway Safety Administration; an increase of 13 percent over 2020.]

AASHTO noted that the $1.2 trillion Infrastructure Investment and Jobs Act or IIJA enacted November 2021 provides an increased level of federal support to state DOTs and their local partners to help them combine efforts to provide a safe, equitable, and sustainable transportation system for the nation.

“The IIJA clearly calls out the principles of the Safe System Approach: that no death or serious injury is acceptable; people make mistakes and are vulnerable; we all share responsibility in preventing serious crashes; we need to be proactive in our efforts, and we need to have redundant safety strategies in place,” the organization added.

To that end, AASHTO outlined in its letter four safety strategies it plans to encourage in the near-term under the leadership of AASHTO 2022-2023 President Roger Millar and his emphasis areas:

“When it comes to VRUs, they are not traveling in enclosed vehicles designed with structural and technological protections that reduce crash severity,” AASHTO noted.

As a result, the nation has experienced an increasing trend in VRU fatalities and serious injuries for some time now, and states are committed to combating this trend.

“The IIJA includes a provision for states to include VRU safety assessments in their Strategic Highway Safety Plans and requires states to consider the Safe System Approach when conducting these assessments,” the group noted. “While states typically analyze their crash data to understand VRU safety issues, IIJA provisions for considering demographic data for crash locations will help ensure a more comprehensive look at equity-related factors in identifying locations and potential projects.”

Thoughtful use of data grounded in historical understanding will enable agencies to address more effectively the effects of transportation project decisions – past and present – that created barriers for those who rely most on active transportation and transit access, AASHTO added.