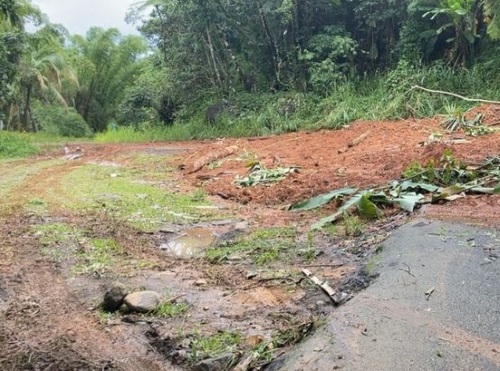 [Above photo via FHWA]

Many of the roads in the El Yunque National Forest remain impassable for passenger vehicles and FHWA said its engineers as well as those from the U.S. Forest Service are currently undertaking emergency work, including debris removal and slope stabilization.

That $5.2 million funding is in addition to the $8 million in ER funds FHWA issued in late September to repair Hurricane Fiona flooding and landslide damage to highways and bridges on the island.

“The Federal Highway Administration is working closely with the Forest Service to repair the damage caused by heavy rainfall in El Yunque National Forest,” said Acting FHWA Administrator Stephanie Pollack in a statement. “The emergency relief funding we are providing will help get those repairs done as soon as possible and better prepare this area for future rain events.”

To that end, a panel of state department of transportation and FHWA leaders recently discussed some of the lessons learned from hurricane recovery efforts undertaken by Florida and Puerto Rico.

“While you are out there clearing and preparing roads – we need to come along and provide support,” he said. “It’s about providing money needed right away for repair costs and we make it a very quick process [so states] can start paying for things now.”

Vélez-Vega also stressed the vital importance of federal fiscal support for the series of hurricanes that pummeled Puerto Rico over the last several years, including Hurricanes Irma and Maria in 2017 and Hurricane Fiona in 2022.

“We’ve had our share of hurricanes over the last five years and we’ve had a lot of federal help to recover from them,” she said. “Over the last two or three years, those storms have changed the project map in Puerto Rico. It is a big change but we are moving along. Cash is very important for getting repairs done. It takes time and a lot of money and we are still in recovery from them.”

FAA Awarding More Than $2B in IIJA Funds to Airports