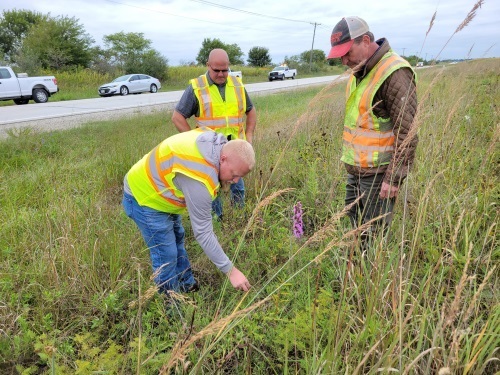 The Illinois Department of Transportation recounted in a recent blog post how it changed its mowing practices over the years to better protect roadside landscapes that are vital to pollinators and native planet life.

The agency has adopted mowing policies to protect the habitat and migratory patterns of the monarch butterfly and other pollinators that use it as a food source. That policy allows for mowing of the state’s roads in a four-year rotation during the summer.

However, Andy Stahr, Jay Keigher, and Kip Rutledge – who work for Illinois DOT’s District 3 – enhanced that program by further limiting roadside mowing along Illinois 54, which runs along a railroad right-of-way in Ford County. That encouraged the spread of native prairie plants onto Illinois DOT’s roadsides.

“We didn’t sow native seeds here,” explained Keigher, a maintenance field engineer for yards at Illinois DOT. “These plants spread from the existing remnant prairie on the railroad property. This wouldn’t be here if it wasn’t for our new mowing policy. We would’ve mowed 30 feet wide through here and we used to do that. Since we stopped doing that, I’ve seen more and more plants like these moving up our slopes and onto our backslopes.”

However – great as it is to have the railroad’s prairie spread onto Illinois DOT’s land, noted Stahr, a roadside management specialist for the agency – that doesn’t mean the job is done. While it means keeping roadside mowing to a minimum, it still means doing work to maintain what’s now considered a developing prairie.

“It’s going to be a constant problem because you have weeds coming in every direction,” Stahr added. “You’re always going to have spots where Canada thistle pops up. That’s why you can’t completely step away from it. Every once in a while you’re going to see a patch of something and you’re going to have to go in and herbicide it out and you got to reseed that little patch.”

Keigher emphasized that a lack of maintenance threatens this effort. For example, invasive Russian olive trees will block the sun and kill existing plants if left unchecked. That tree also can attract birds that transport invasive seeds through their excrement and re-contaminate the prairie with non-native and invasive plants.

Thus, such invasive plants and trees must be mowed down to the ground and destroyed. “You can’t just quit,” Keigher said. “You have to keep maintaining that.”

The goal is to re-develop a prairie ecosystem that is self-sustaining – a three to five year process, Stahr noted.

“Reconstruction means applying herbicide to kill all existing vegetation at the site and scarifying the soil. Then it is managing the land for up to two years by mowing,” he explained.

“Seed also are drilled into the ground to establish a deep root system. Once it’s seeded, we really don’t have to do anything else to make it grow other than keep the vegetation and weeds down for that first year,” Stahr pointed out. “You may be able to let it go the second year if you get a great response. It’s usually the third year that you can let it go and you’ll see everything start to bloom.”

Done right, the prairie polices itself against invasive plants, he said.

“There’s only so much space in the root system,” Stahr noted. “Once you get all these plants living together in such density like this, they interlock their root systems so aggressively that when a weed seed lands in here, there’s nowhere to germinate and grow. That’s why they’re so low maintenance when you get them established.”

While Keigher would love to see every roadside receive this treatment, he prefers to do smaller quarter-mile prairie sections at a time.

“We’re expanding at the rate where we can maintain it,” he pointed out. “We just can’t do it all because we don’t have enough time to take care of it. It’s a lot. We wanted to make sure we’re successful at it before we bite more than we can chew.”