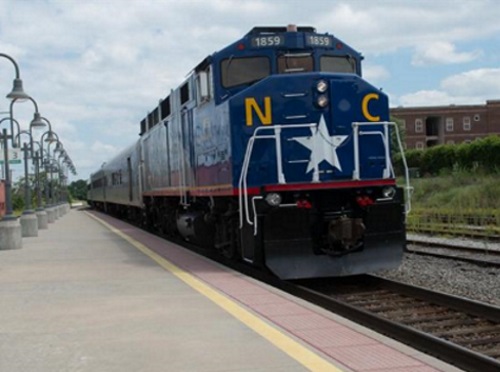 After reporting a record-breaking month in September, NC by Train – an intercity passenger rail service operated by the North Carolina Department of Transportation – set another monthly record for ridership in October.

The Carolinian and Piedmont trains carried 55,493 passengers in October, beating September’s record of 48,488 passengers by over 14 percent, according to NCDOT data.

“What a fantastic accomplishment for the traveling public,” noted NCDOT Secretary Eric Boyette in a statement. “We are excited to see record numbers of our citizens and visitors choose to ride NC by Train. The train offers people an easy way to travel without the stress of a drive.”

In addition to making its regular stops, NC by Train passengers in October were also able to make a one-day special stop in Lexington for the Barbecue Festival and a stop at the North Carolina State Fairgrounds in Raleigh during the N.C. State Fair.

NC by Train – in operation since 1990 – provides multiple trains throughout the day between Raleigh and Charlotte with stops in the cities of Cary, Durham, Burlington, Greensboro, High Point, Salisbury, and Kannapolis, as well as daily service connecting Charlotte, Raleigh, and New York via the Carolinian.

To meet the increasing demand, NC by Train launched a fourth daily round trip between Raleigh and Charlotte in 2018, making passenger rail even more convenient for travelers seeking additional transportation options.

State departments of transportation play a critical role in providing passenger rail service across the country.

For example, the conjunction with the Rhode Island Department of Transportation, Amtrak recently completed Americans with Disabilities Act or ADA-related improvements to the Westerly Rail Station in Westerly, RI.

Meanwhile, in conjunction with the Vermont Agency of Transportation and the New York State Department of Transportation, Amtrak is now selling Ethan Allen Express tickets for daily travel between Burlington and New York City – a route that includes new stops in Vergennes and Middlebury, VT.