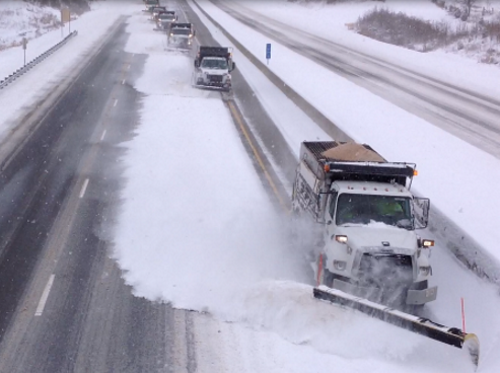 Even as winter weather begins to drop snow and ice on roadways across the country, state departments of transportation continue adjusting their operations to manage what has become an ongoing shortage of snowplow operators.

[Above photo by KYTC]

For example, the Missouri Department of Transportation recently deployed crews to handle the aftereffects of snowstorms that developed on November 14 across much of the state. The agency said the “primary focus” of its snowplow crews during such storms remains on interstates and other major high-volume highways. After the precipitation ends and the high primary routes are mostly clear, crews then shift their focus to lower-volume roadways.

However, despite MoDOT’s best efforts, the agency has not made progress filling the winter operations vacancies. “With years of high turnover, we are nearly 30 percent below the staffing we need in order to cover more than one shift in a statewide storm,” explained Becky Allmeroth, MoDOT chief safety and operations officer, in a statement. “With this statewide winter storm, we will not have enough employees to fill all the trucks on the second shift. It will take longer to clear the roads especially the lower volume number and lettered roads.”

The North Dakota Department of Transportation is dealing with same issue, especially in its Williston District, which could affect future snow and ice removal operations.

The Williston District is currently operating at approximately 75 percent of normal staffing capacity, so the North Dakota DOT has developed plans to reallocate resources from other areas of the state during winter events to help cover the Williston area.

“Our dedicated and committed operators are working hard to minimize any inconvenience to Williston and the surrounding communities,” said North Dakota DOT Director Ron Henke in a statement. “If there is a statewide winter storm event, motorists in northwest North Dakota should expect longer wait times for the snow to be cleared. We thank the public in advance for their patience.”

[Editor’s note: A survey conducted by the American Association of State Highway and Transportation Officials in early 2022 found that 84 percent of respondents indicated they are experiencing higher than normal vacancies of snowplow operators this winter season. The survey, conducted during January and February, included responses from 31 state departments of transportation and 51 public works agencies from across the United States.]

The Kansas Department of Transportation also faces a similar situation, as staffing shortages continue to affect the agency’s ability to clear snow and ice from highways in a timely manner.

“We want motorists to know ahead of time – it’s not a matter of if the highways will be cleared this winter, but when,” emphasized Kansas DOT Secretary Julie Lorenz in a statement. “Our crews will be proactive by shifting crews and pretreating surfaces whenever possible but having fewer employees could cause delays in removing snow and ice from all the affected roadways.”

She added that Kansas DOT is about 24 percent short of snowplow operators needed to fully staff offices across the state. However, she stressed that all of Kansas DOT’s field offices prepared for winter operations in September and October – conducting hands-on “snow fighter” training exercises, stocking up on salt, sand, and other materials, while conducting pre-maintenance work on snowplows and other equipment.

“Our maintenance crews always do their best to serve the public as they work 12-hour shifts in their efforts to clear the highways,” Lorenz noted.

In early November, the Wyoming Department of Transportation reiterated its commitment to its “Snowplow Priority Plan” ahead of the upcoming winter season despite facing its own shortage of snowplow operators.

That plan prioritizes plowing efforts on busiest highways, like interstates, before rural routes. It also helps to “strategize” plowing operations to maximize community connectivity while maintaining cost efficiencies, which in practice means delaying the clearing of areas such as road shoulders for a day.

“We are dedicated to moving snow and keeping the state connected despite Wyoming’s challenging winters,” stressed Wyoming DOT Director Luke Reiner in a statement. “The agency is certainly not immune to nationwide labor and supply chain challenges, but we will do everything in our power to continue to meet our mission despite these obstacles.”

Moving crews based in areas less impacted by a storm to routes seeing the heaviest weather conditions will continue to be the agency’s main labor-management strategy for the upcoming winter, he said.

However, Wyoming DOT said staffing levels are at the point now where widespread winter storms may impact plowing efforts to levels below what is indicated on the Snowplow Priority Plan. That means motorists might experience increased winter hazards like ice and drifting snow in these areas this winter, especially during heavy, multi-day storms.

Additionally, Wyoming Highway Patrol troopers are experiencing staffing shortages, which will likely also contribute to longer response times for nonemergency calls like VIN inspections, loose livestock or crashes with no injuries. In some cases, state patrol officers may call for crash information rather than driving to the scene.

Finally, parts for snowplows and state patrol vehicles are in short supply; increasingly backordered and delayed, which can prolong the time vehicles are in the shop rather than on the roads, Wyoming DOT said.