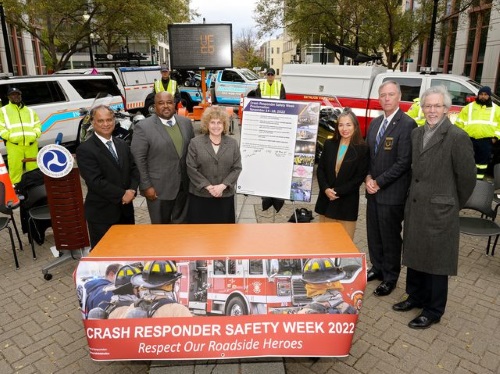 [Above photo by FHWA]

The goal of that event is to bring public attention to the men and women who risk their own safety to save lives at the scene of a crash. Crash Responder Safety Week, which ran from November 14-18, is part on an ongoing national effort to both protect responders who are at the scene of highway crashes and remind the public of their responsibility to use caution when driving near roadside incidents involving emergency personnel.

USDOT officials at the event pointed to crash response as a key component of its new National Roadway Safety Strategy or NRSS, unveiled in January. Specifically, under the NRSS, post-crash care is one of five key tactics that will help crash victims receive medical care more quickly, and ultimately help more people survive roadway crashes, while creating a safe working environment for first responders and preventing secondary crashes through robust traffic incident management or TIM practices.

Designed by and for first responders, FHWA launched TIM training in 2012. It helps teams of police, firefighters, highway workers, and emergency medical services and towing personnel ensure safe and effective coordination at a crash scene. More than 619,000 responders have received TIM training to date, which helps them learn a common set of effective practices, including quick clearance techniques that improve communications and reduce the amount of time needed to remain on scene.

“Emergency responders risk their lives to do their job – but they shouldn’t have to. That is why we are working to grow awareness of the risks that emergency responders face, so that we can make our roadways a safer place for all,” noted Stephanie Pollack, acting FHWA administrator, in a statement.

“Reducing fatalities will take all of us working together in new ways, with new resources, and with new benchmarks,” added Ann Carlson, acting administrator for NHTSA. “Post-crash care is critical to saving lives, but we also need to protect first responders who put themselves in danger to provide aid at the scene of a crash. Every second counts in surviving a crash and Crash Responder Safety Week is an effort to protect emergency responders, who are risking their lives every day.”

“Crash Responder Safety Week shines a well-deserved spotlight on brave individuals who save countless lives with their decisive and courageous actions at roadway crash scenes,” noted Robin Hutcheson, administrator of FMCSA. “Crash responders keep people from dying in crashes and make it possible for us to envision reaching our goal of zero fatalities on America’s roadways.”

The Iowa Department of Transportation and the Iowa State Patrol jointly highlighted Iowa’s “Move Over Law,” originally enacted in 2002 and expanded in 2018 to include not only emergency vehicles but any vehicle alongside the road with flashing lights, including passenger vehicles, tow trucks, utility company vehicles and garbage trucks.

Iowa DOT added that, according to NHTSA data, 65 first responders died in U.S. traffic-related incidents in 2021. To keep everyone safer on the road, states across the country have enacted some form of a “Move Over” law to encourage motorists to either slow down or move over when they come up on a crash scene. However, national data shows that nearly 30 percent of people are unaware that these laws exist.

“In Iowa, we have collaborative groups that actively pursue traffic incident management training to make incident scenes safer for you and for the responders,” noted Scott Marler, Iowa DOT director, in a statement. “The concept is to bring all types of responders together in one room – similar to a pit crew at a NASCAR race – so everyone knows his or her job and it is done efficiently and in a coordinated manner.”

“First responders work tirelessly and risk their own safety to save lives at collision scenes,” noted Tony Tavares, director of the California Department of Transportation, in a separate statement. “We need motorists to do their part to protect responders by slowing down, moving over a lane, and staying alert when approaching traffic incidents.”

Meanwhile, the Colorado Department of Transportation joined with the Colorado State Patrol, the National Highway Safety Administration, AAA Colorado, and the Colorado State Committee on First Responder Safety to raise awareness about being cautious near traffic incidents along state roadways during the week.

In a statement, the agency said that – over an average month – Colorado emergency crews respond to 2,088 traffic incidents. “Colorado DOT and its partners are committed to improving traffic incident management to restore the flow of traffic disrupted by such incidents as safely and quickly as possible,” the agency added.