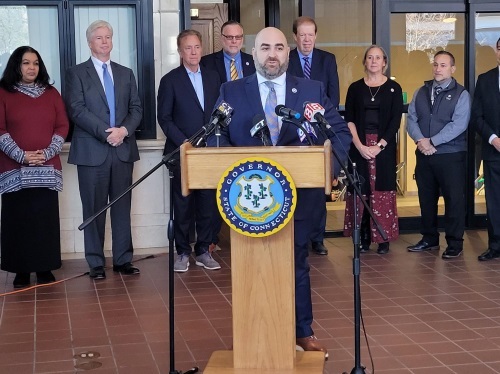 Governor Ned Lamont (D) plans to appoint Garrett Eucalitto (seen above) as commissioner of the Connecticut Department of Transportation in early 2023. Eucalitto will succeed current Connecticut DOT Commissioner Joseph Giulietti, who is retiring at the end of the year.

The governor noted in a statement that he would forward Eucalitto’s nomination as Connecticut DOT commissioner to the General Assembly for consideration when he begins his second term on January 4, 2023.

“Garrett has the bold vision and leadership capability to move [state transportation] projects forward in a way that best benefits the people and businesses of our state,” noted Gov. Lamont.

Eucalitto is currently deputy commissioner of Connecticut DOT, a position that he has held since January 2020. He previously served as the transportation program director for the National Governors Association or NGA in Washington, D.C.

Before joining the NGA, Eucalitto was undersecretary for comprehensive planning and intergovernmental policy for the Connecticut Office of Policy and Management during the administration of Governor Dannel Malloy (D). In that position, he researched, evaluated, and developed transportation, environmental, and regional planning initiatives.

Ecualitto, who also served for six years as the legislative assistant of former Sen. Joe Lieberman – covering appropriations, transportation, and infrastructure – holds a bachelor’s degree from the College of the Holy Cross and a master’s degree from Boston University. He is a native of Torrington, CT, and currently lives in New Haven.

Gov. Lamont also expressed his gratitude for Giulietti’s service as Connecticut DOT commissioner since his appointment to that role on January 9, 2019.

“Joe and his team have made tremendous progress over that past four years enhancing our transportation infrastructure, rebuilding our roads, highways, and bridges, and increasing and improving rail service,” the governor said. “We are better off today thanks to his service to our state. I wish him the best in his future endeavors.”

“Being CTDOT commissioner has been the honor of a lifetime,” Giulietti noted. “I know Connecticut DOT will be in good hands under Garrett’s leadership. He is committed to delivering a cleaner and more reliable transportation network and is passionate about improving roadway safety. At this pivotal time, Garrett is the best person to lead Connecticut DOT into its next chapter.”