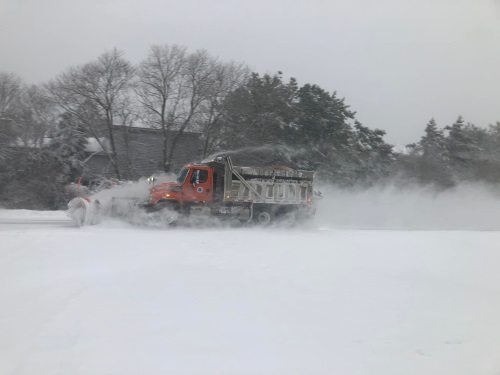 Several state departments of transportation are either launching or wrapping up annual “Name the Snowplow” contests in their respective regions.

For example, the Delaware Department of Transportation recently launched its second annual statewide “Name That Plow” contest for elementary school students. The agency will accept entries via email until December 13, selecting one winner from each of Delaware’s three counties.

“Our inaugural ‘Name That Plow’ contest last year was a success with more than 100 entries receive,” noted Delaware DOT Secretary Nicole Majeski in a statement.

“We had a great time visiting the three [2021 winning] schools to allow students to get up close with the plow and learn about the hard work by our snowplow operators and technicians tasked with keeping our roads clear during winter storm events,” she said. “We look forward to doing it again this year and asking students to remind their family and friends to give our plows plenty of room to work this winter.”

Concurrently, the Massachusetts Department of Transportation snowplow-naming contest is also ongoing, with entries accepted until December 23.

“We are excited to provide elementary school students with an opportunity to have some fun this winter season by helping to name a snowplow,” explained MassDOT Secretary & CEO Jamey Tesler in a statement.

“The contest is a great way for younger students to take some time to have fun, be creative, work together to identify proposed names and be part of a new state government initiative, and we encourage all statewide schools to participate,” he said.

Meanwhile, the Arizona Department of Transportation selected three winning monikers chosen from the 7,000 entries in its “Name-A-Snowplow” contest:  “Alice Scooper,” “Snowguaro,” and “Frost Responder.” The agency has already affixed the new names to the driver- and passenger-side doors of selected snowplow truck cabs.

Concurrently, the Kentucky Transportation Cabinet is wrapping up its very first statewide “Name the Plow” program, offering drivers a chance to name one of 14 snow trucks in the state; naming one truck in each of Kentucky’s 12 highway districts, along with two tow plows from the Franklin County-based KYTC strike force.

“Many of our drivers live in the communities they serve and giving the public a chance to name a plow in their home county is a fun way to make the most of winter weather and showcase pride for our dedicated employees,” noted KYTC Secretary Jim Gray in a statement.

State DOTs are also using these contests to highlight the ongoing nationwide shortage of snowplow operators.

A survey conducted by the American Association of State Highway and Transportation Officials in early 2022 found that 84 percent of respondents indicated they are experiencing higher than normal vacancies of snowplow operators this winter season.

That survey, conducted during January and February, included responses from 31 state departments of transportation and 51 public works agencies from across the United States.

Transportation agencies rely on full-time employees, seasonal or temporary employees, and private contractors to operate snowplows. AASHTO’s survey found that 81 percent of those higher-than-expected vacancies were due to a lack of full-time employees. Of the remaining respondents, 44 percent indicated issues finding seasonal/temporary employees, and 31 percent indicated issues securing private contractors.

A follow up survey of 24 states conducted by AASHTO in November found 19 state DOTs are still experiencing snowplow driver shortages, with only five states saying they are not.