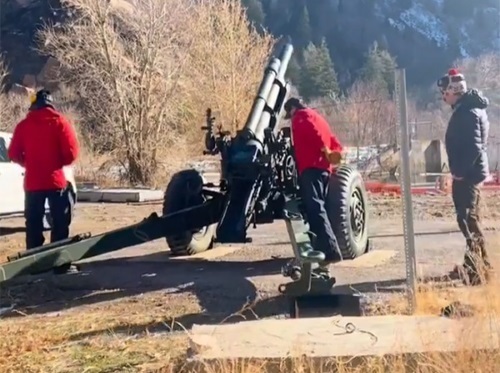 Crews with the Utah Department of Transportation recently test-fired howitzers used to create controlled avalanches on state routes in the Big and Little Cottonwood canyons; part of the agency’s plan to ensure motorist safety on roads potentially threatened by avalanches, while also protecting said roads from avalanche damage.

“Our goal is to make sure people can travel safely in our canyons throughout the winter,” said Steven Clark, Utah DOT avalanche program manager, in a statement. “We’re always working to keep these vital highways open as much as possible.”

[Editor’s note: A panel discussion held at the 2019 TransComm meeting in Indianapolis stressed that more public outreach on the part of state departments of transportation regarding snow and ice removal operational needs is critical to creating a safer and more efficient highway system during the winter season.]

In addition to howitzers, Utah DOT avalanche control methods include explosives placed by hand or dropped by helicopter as well as ‘Avalaunchers,’ which use compressed gas to launch a small explosive. Agency crews also use remote avalanche control systems or RACS, which are small towers installed on known avalanche paths that use fuel/air mixtures to create small, pinpoint explosions when remotely activated by Utah DOT crews.

Those various tools provide several options for controlling avalanches on the approximately 70 avalanche paths in Little Cottonwood Canyon that cross SR-210, as well as other highways with avalanche risk such as SR-190 in Big Cottonwood and US-189 in Provo Canyon.

“Utah DOT is one of the leaders in transportation avalanche mitigation,” Clark said. “We utilize the newest technologies and are always looking to incorporate new techniques and equipment to ensure safety for all canyon travelers.”

Several state DOTs with mountain roads in their care tap into a variety of avalanche control methods similar to those used by Utah DOT as well as a different techniques.

For example, the Washington State Department of Transportation uses several “passive” control methods to manage snow slides. These include elevated roadways so avalanches pass under them and catchment basins to stop the avalanche before snow reaches the highway.

WSDOT also uses use diversion dams and snow berms to keep the snow off the highway, the agency said.

Meanwhile, the Colorado Department of Transportation coordinates with its sister agency, the Colorado Avalanche Information Center or CAIC, to regularly monitor and control 278 of 522 known avalanche paths located above highways across the state.

Their joint weather forecasting effort helps prevent avalanches from affecting drivers and passengers on the highways within those avalanche zones.

Georgia DOT Launches ‘Ahead of the Curve’ Podcast