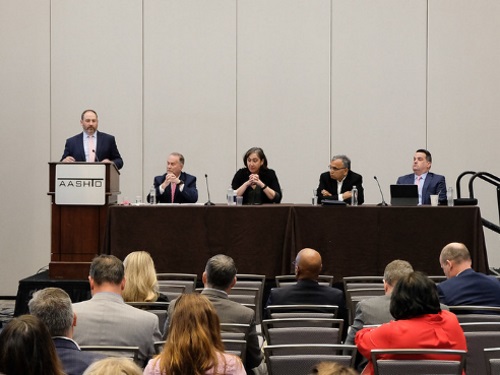 State departments of transportation have a “big role to play” in the ongoing nationwide deployment of broadband internet service – especially in rural parts of the country. The question state DOTs must answer, however, is finding out how to coordinate such deployments with federal, local, and private sector stakeholders most effectively when it involves highway right-of-ways.

“We have to make sure we coordinate. We have to work through the steps of what our policies will be together,” stressed Eric Boyette, secretary of the North Carolina Department of Transportation.

Boyette spoke as part of a panel of federal, state, and private sector officials during knowledge session at the American Association of State Highway and Transportation Officials 2022 Annual Meeting in Orlando in October; a session sponsored by RS&H.

“The first thing to think about is cost; this is where partnerships are key to fostering an understanding about costs,” he explained. “It also involves communication back and forth with the community to help generate an understanding about what we can and cannot do. We also need to address such broadband projects properly from a legal standpoint, too.”

AASHTO has also provided suggestions to the U.S. Department of Commerce, which is disbursing major funding for such projects, on how to improve the role state DOTs play in broadband projects.

In a February letter, AASHTO said federal agencies should avoid a “one size fits all” approach to broadband projects and promote public-private partnerships between state agencies and broadband providers to expand future deployments.

Back at the knowledge session, Allison Camden – recently named senior director for external relations for the Washington State Department of Transportation – noted that the COVID-19 pandemic proved to be a critical “inflection point” where broadband deployment is concerned.

“COVID-19 changed everything – [the pandemic] showed how we had to upgrade our internet and bandwidth,” she said. “The [state] legislature stepped up and provided us more options for how we manage and work on conduits in our highway right-of-ways. We also need to include a focus on equity so we reach underserved communities.”

Camden added that WSDOT has sought to emulate Utah’s approach to broadband deployment via highway right-of-ways – a state profiled by the Federal Highway Administration in a case study for its broadband approach.

While states do not support a strict federal preemption on how they manage broadband deployment on their own properties, Carlos Braceras – executive director of the Utah Department of Transportation and AASHTO 2018-2019 president – has noted in previous Congressional testimony that speeding up the federal permitting process is key.

Especially for rural areas, speeding up the permitting process would in turn facilitate “the merger of technology between motor vehicles and infrastructure,” leading to greater mobility and increased safety on the nation’s roads, he said at the time.

“An important component to advance roadway technology is the ability to create a digital highway with fiber optics to make our roads smarter and safer, benefiting surrounding communities, including underserved rural areas,” Braceras noted.

Troy McNichols, vice president of external affairs and project manager of broadband public private partnerships at AT&T, echoed WSDOT’s Camden on how connectivity and broadband access have “become especially paramount” as the America recovers from the COVID-19 pandemic, especially in the past year.

“We understand the need to close the gap in high-speed internet service, especially in rural areas,” he explained during the knowledge session. “Broadband is key to addressing and closing the digital divide. That is why coordination between federal, state, and local agencies with the private sector on day one is very important.”