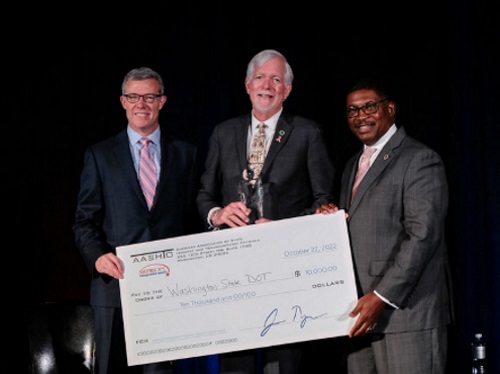 An equity-inspired infrastructure project that reconnected a community of color in downtown Pittsburg and a project that is guiding active transportation projects and programs across Washington State received the top prizes in the 2022 America’s Transportation Awards competition.

The winners of the Grand Prize and People’s Choice – each coming with $10,000 cash prizes to support a charity or transportation-related scholarship program of the winners’ choosing – received their awards at the 2022 AASHTO Annual Meeting in Orlando.

Those projects first faced off in four regional competitions, with the three highest-rated projects from each region – 12 in all – moving on to compete for the final two national awards.

An independent panel of industry judges selected the Grand Prize winner, while the project receiving the highest number of online votes – weighted by state population – earned the People’s Choice Award.

“This year’s America’s Transportation Awards competition consisted of the most diverse group of projects we’ve seen in all 15 years of the competition,” said Jim Tymon, AASHTO’s executive director, in a statement.

“The Top 12 alone included a public engagement tool, a road diet project, a memo of understanding between an entire region that will get life-saving and emergency supplies to communities during disasters,” he added.

“Our ultimate winners – an active transportation plan and a park project to reconnect a community divided by an interstate project several decades ago – are absolutely representative of today’s state DOTs and the wide range of work they do for our communities every day,” Tymon noted.