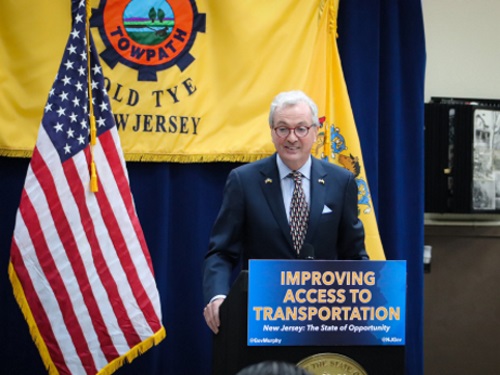 [Above photo by New Jersey DOT]

The “Safe Streets to Transit” program will disburse $13.4 million in funding to improve access to transit facilities and public transportation in counties and municipalities.

“In order to maximize the impact of our considerable public transportation upgrades, we must ensure that our transit facilities are linked not just to economically thriving neighborhoods, but to streets that bring our community members to their destination reliably and efficiently,” the governor said in a statement.

He added that, for many state residents, “commutes or daily travels do not begin and end at the train station. That’s why my administration is doubling down on its efforts to promote active transportation alternatives and ensure that – whether you’re a pedestrian or cyclist – you can safely and affordably access our nation-leading public transportation network.”

“We appreciate the Governor and the Legislature providing an additional $20 million this year for Bikeways, Safe Streets to Transit and Transit Village grants,” added New Jersey Department of Transportation Commissioner Diane Gutierrez-Scaccetti.

“The increased funding means a record number of towns are receiving grants to create safer, more walkable, and bikeable communities, and promote the use of public transportation,” she said.
Other states have made similar disbursements in recent months in support of bicycle, pedestrian, and transit projects.

For example, the California Transportation Commission recently approved $1 billion for 93 new walking and biking projects for disadvantaged communities as part of its 2023 Active Transportation Program. It also allocated more than $878 million for projects to repair and improve transportation infrastructure throughout the state.

The active transportation projects approved by the commission will benefit disadvantaged communities throughout California, two-thirds of which will implement safe routes for children to walk or bike to school.

“California and our federal partners are continuing to make historic headway in addressing our transportation needs and advancing safety, equity, climate action and economic prosperity,” noted Tony Tavares, director of the California Department of Transportation, in a statement.

“Importantly, this includes significant investments in infrastructure that allows everyone to access active means of transportation, like walking and biking,” he added.