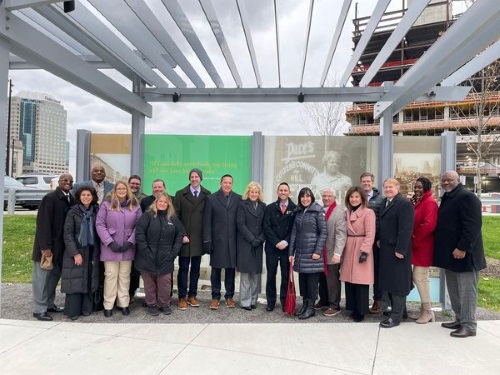 PennDOT’s I-579 CAP project received the contest’s Grand Prize, which included a $10,000 cash prize to support a charity or transportation-related scholarship. Multiple stakeholders involved in the project raised an additional $63,000, all of which is going to two charities – Ozanam Inc. and ACH Clear Pathways – located in the Hill District; the location of the roughly $29 million I-579 CAP project.

Ozanam, Inc. is based in Pittsburgh and its mission is to help the boys and girls of Western Pennsylvania develop into responsible young adults through positive developmental training, including educational programming, athletic competition, social and cultural activities and exchanges and academic support services.

Meanwhile, ACH Clear Pathways – located in the Hill District – provides youth and family with visual and performing arts programming and serves as an artistic hub by providing artists and community a place to thrive.

“This project shows what transportation can be at its best,” said PennDOT Secretary Yassmin Gramian in a statement. “I’m so proud that we received the America’s Transportation Award, and that we’re able to pay it forward to organizations making a real difference in this community.”

In 2012, demolition of the Civic Arena led to the creation of a “new vision” for the Hill District, with one reconnection to the downtown core a key project priority. The I-579 CAP bridges the interstate with a new three-acre green space and restores the long-lost direct link to the economic opportunities and amenities of downtown Pittsburgh.