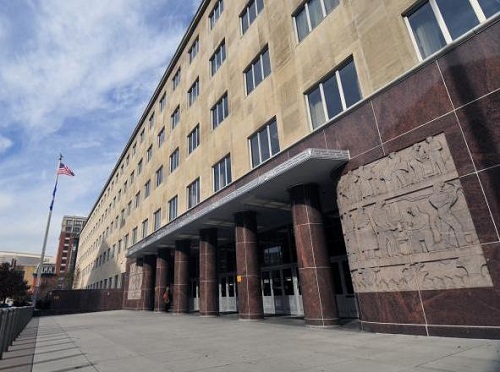 A memo issued by the Federal Highway Administration in December 2021 ostensibly to provide “guidance” to states for allocation of federal infrastructure funds has been declared a “rule” after review by the Government Accountability Office.

[Above photo by GAO]

FHWA argued that its memo is not a rule because it is an internal document that does not impose a new requirement or change the underlying federal-state relationship established in law; instead, FHWA contended that the memo did not nothing but “restate long-standing statutory and regulatory requirements.”

However, in a decision issued on December 15, GAO said it “disagreed with characterization” of FHWA’s document.

“The memo sets out FHWA’s preferred projects for funding under the Infrastructure Investment and Jobs Act [IIJA],” GAO explained. “When an agency rule has the effect of inducing changes to the internal policy or operations choices of the regulated community, that rule has a substantial impact on the rights and obligations of non-agency parties.”

GAO pointed out that the memo instructs FHWA staff to encourage states and decision-makers to select certain projects for funding based on the agency’s stated preferences. GAO noted that such a request from senior agency leadership “proscribes policy” as defined under the Congressional Review Act or CRA and is thus considered a rule.

“CRA requires all agency rules to be submitted to Congress and the Comptroller General before they take effect,” GAO added. “CRA incorporates the Administrative Procedure Act (APA) definition of a rule for this purpose with certain exceptions.” Though, FHWA did not submit the memo for CRA review, GAO nonetheless concluded that the memo “is a rule for purposes of CRA because it meets the APA definition of a rule and no exceptions apply.”

Indeed, the directives outlined in FHWA’s December 2021 memo is intricately intertwined with the rest of guidance the agency has posted to its IIJA website, in fact underpinning all the guidance for the programs funded by that $1.2 trillion legislation.

The American Association of State Highway and Transportation Officials alluded to that issue in a January 2022 letter sent to FHWA in response to its memo.

“While the legislative process that led to the IIJA was certainly unconventional, the enacted legislation – and the Congressional intent regarding the Federal-aid Highway Program over the next five years – provides state DOTs with flexibility in how investment decisions are made with formula dollars to meet each state’s unique mobility and accessibility needs,” the organization said. “At the end of the day, collective efforts of states will go a long way in achieving the outcomes that are fundamentally agreed upon between FHWA and state DOTs.”

[Editor’s note: AASHTO reiterated those points in a 30-page paper sent to the U.S. Department of Transportation in April 2022; a paper that outlined a host of IIJA implementation recommendations.]

AASHTO emphasized that state DOTs balance “many different needs” when it comes to their respective transportation systems, ranging from managing existing assets for the long-term, system operations, demand management, strategic highway expansion, and additional capacity for other modes.

“State DOT investment strategies are not made in a vacuum,” AASHTO pointed out. “They must be made within the bounds of both federal requirements and the constitutional and statutory authority provided by state legislatures. Investment strategies and decisions reflect robust community engagement that informs long-range plans and transportation improvement programs developed with metropolitan and regional planning organizations.”

AASHTO reiterated that – in the transportation sector – federal dollars play a relatively small role relative to total investment made in the United States. For instance, according to latest data from the Congressional Budget Office, only 22.3 percent of total transportation funding for capital, operations, and maintenance activities comes from the federal government. The remainder, or 76.7 percent, represents state and local government funding.

“How each state DOT uses its mix of funding sources for its investments varies greatly, reflecting the rich diversity and transportation needs across the country,” AASHTO emphasized. “That is why a one-size-fits-all approach would create unnecessary gaps and conflicts in meeting the various transportation challenges in each state.”